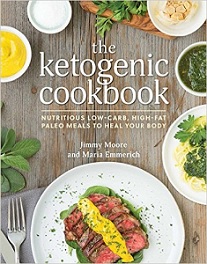 If you’ve become bored with your same-old, go-to, low-carb and ketogenic meal repertoire, and are looking to rekindle your passion for this way of eating, this book is for you. If you can’t stomach the thought of another plate of eggs & bacon for breakfast (that is, if you’re a breakfast eater at all), or if you think you’ll scream if you have to choke down another bunless cheeseburger, consider this book to be the inspiration you’ve been waiting for. (Although, if you ask me, bacon, eggs, and bunless burgers never get old!)

The book is called The Ketogenic Cookbook: Nutritious Low-Carb, High-Fat Paleo Meals to Heal Your Body.


Before I say anything else, I’d like to acknowledge right here, at the start, that I received a copy of this book for free. Jimmy was kind enough to have his publisher, Victory Belt, send me a courtesy copy. (Other awesome Victory Belt titles you might be familiar with include Practical Paleo, Mediterranean Paleo, and The Paleo Solution.)

If you think my having received a copy for free automatically biases my review, then feel free to stop reading. You know how to close this window and go do something else. But I’d like to think I’ve established a reputation for honesty. I’ve shared with you my struggles as well as my triumphs, and I’ve certainly been open about times when my own diet has left a lot to be desired. So hopefully you know by now that I don’t sugar-coat things (no pun intended), and I try not to let my views be shaped by slick marketing. All of this is just my way of saying, here is my opinion of this book, which I don’t think has been clouded by my having come by it gratis.

In the spirit of staying brutally honest, I’ll start this review by pointing out who does not need this book:

People who are totally content with the variety of food they’re already eating, and who need absolutely no help in figuring out what to eat on a ketogenic or very low-carb diet. If you’re happy and you know it, clap your hands and keep on’ truckin’.

Here’s who could really benefit from this book:

People who are new to this and have no clue how to approach keto cooking, and also people who are bored with their ketogenic, low-carb, Paleo, or Primal diet. If you need to infuse new life into your cooking repertoire, this book will not disappoint! If you are at your wit’s end in coming up with new things to do with ground pork, and if you absolutely, positively cannot stomach another bowl of spiralized zucchini noodles, GET. THIS. BOOK.

Personally, I kind of don’t understand people who say they “don’t know what to cook.” I guess maybe it’s because I grew up with a mother who was an excellent self-taught cook, and after years of watching her, as I got older and started cooking for myself, I’ve never been afraid to throw some stuff in a pan and see what happens. (When in doubt, use bacon fat and add salt!) My mother is no longer with me, but her casual and confident approach to cooking is.

I don’t get bored with the same relatively small selection of food. I can eat ground beef or sausages with roasted vegetables 5 nights a week and be perfectly content. My lunch routine generally consists of a can of tuna and some raw bell pepper. If you are not so thrilled with leftovers, and every night needs to be an all-out whirlwind of adventure and romance for your taste buds, then this cookbook is for you.

And here’s who might want to get this book just for the fun of it:

This book is suitable for people on ketogenic diets, low-carb diets, Paleo diets, and also people who eat whatever the heck they want, because the truth is, it’s just great food! Regardless of whether someone eats grains, or dairy, or feeds themselves by going from state fair to state fair and following the deep-fried Twinkie circuit, this book is chock-full of recipes to get people excited about the endless possibilities of very low-carb cooking.

For me, that’s what cookbooks do best: give me ideas. Even if I don’t follow the specific recipes in a cookbook, looking through them gives me lots of ideas for things to try, new ways to prepare old staples, and maybe some new seasonings to spice things up. In this regard, this book delivers! Jimmy and Maria have an entire section devoted to condiments, which is awesome, because very often, all it takes to transform a dish from ho-hum into WOW, is a dressing, sauce, or marinade. (And, too often, all it takes to destroy the carb content of an otherwise low-carb meal is a condiment that’s loaded with sugar.) Finally, there’s a cookbook that helps us make homemade versions of these things without tons of high-glycemic sweeteners and wacky vegetable oils. (Yes! Even BBQ sauce! So long & sayonara, HFCS!)

If you just plain love food, this book is a winner. Recipes run the ethno-cultural gamut, with keto bagels & lox (which warms my NYC-born & raised Jewish heart!), keto naan, lamb tikka masala, huevos rancheros, antipasti & Greek mezze, and a section on desserts that will make you excited to start experimenting with the great & versatile low-carb sweeteners out there. There are beef & lamb recipes, pork, poultry, seafood, vegetarian dishes, and a whole section dedicated to appetizers & finger foods, which can make you the host or hostess with the mostest at your next dinner party, and, hey, who knows…maybe they would even convince a guest or two to give low-carb a try!

Okay. Now you know what the book is. Here’s what it is not:

This book is not a primer on the whys and wherefores of ketogenic diets. It is assumed that, if you’re buying this book, you already know about ketogenic and VLC diets. You’re probably already following this type of approach, or at least considering it, so you don’t need a bunch of information about insulin, ketosis, obesity, neurodegeneration, and blah, blah, blah. There are already other books out there that cover that stuff. (One thing I love about the brief explanation the authors do provide about nutritional ketosis, is that they make it clear that being in ketosis doesn’t automatically result in weight loss. If only it were that simple, folks! I have experienced this firsthand, and I’ve also had to explain it to clients. There are myriad reasons to “go keto” or low-carb that have nothing to do with buying smaller clothing. So this book is not a diet program, and it offers no gimmicky false promises about dropping some inordinate amount of weight in the blink of an eye. Hallelujah for honesty!)

Use this book to reinvigorate your cooking and broaden your horizons. Maria and Jimmy include explanations for some of the more esoteric ingredients that might be foreign to you, such as kelp noodles, xanthan and guar gums, liquid smoke, and coconut aminos. Even though things like this are absolutely not essential for keto & LC cooking, they’re worth getting familiar with if you’d like to try to create keto versions of old favorites you’ve been jonesing for.

Let’s talk about the subtitle of this book: Nutritious Low-Carb, High-Fat Paleo Meals to Heal Your Body. Why ketogenic and Paleo? Because: you can construct a ketogenic diet that includes wheat, soy, and dairy, which would make it not Paleo, and you can, of course, construct a Paleo diet that is not ketogenic. So the combination of the two (which implies ketogenic dishes that are free of grains, legumes, and dairy)  marries the best of both these worlds. The recipes exclude grains and soy, but some include dairy. So maybe, in the very strictest sense, they’re not all “Paleo,” but I can’t blame the publisher for wanting to capitalize on the current popularity of both words, Paleo and ketogenic. I’m not about to get my panties in a bunch over that (as Robb Wolf might say), even though I do sometimes get frustrated by semantics. I like that there’s dairy here. A ketogenic diet can be much easier to stick to—not to mention more palatable and enjoyable—when you include cheese, heavy cream, and butter. And even if you don’t eat dairy, this cookbook has a bunch of recipes that will help you make mock versions of yummy dairy foods, such as compound butters using duck fat and lard or tallow, and nacho “cheese” sauce using animal fats, egg yolks and nutritional yeast. (Hey, nutritional yeast is one thing we can credit vegans & vegetarians with popularizing. They use it on popcorn and other foods, to impart a cheesy, nutty, umami flavor.)

Let’s see…what else? Oh! Each recipe comes with an easy-to-read guide to whether it’s nut-free, dairy-free, and how ketogenic it is—meaning, how the macronutrients stack up. The higher the fat and the lower the carbs & protein, the more ketogenic. So Maria and Jimmy have taken all the guesswork out of things. Finding recipes that are suitable for your individual needs couldn’t be easier!

I am so thankful for people like Jimmy and Maria, Diane Sanfilippo, and others, who have the emotional fortitude to write cookbooks. I love cooking, I love food, I love messing around in the kitchen, and I love writing. So you would think creating a cookbook would be right up my alley. But like I said, I just kind of throw stuff in pans and let chemistry take its course. So thank goodness for the people who write these helpful books, because if it were up to me, we’d all be eating pork chops and roasted Brussels sprouts approximately eight days a week.  ;-) 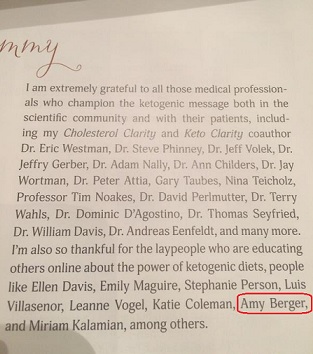 And before we ajourn here, I’d like to point out that Jimmy mentions me by name in the acknowledgements section in the back! Holy moly! As if that wasn’t enough all by itself, look at the people whose names my name is even in the vicinity of: Taubes, Attia, Westman, Volek, Phinney, Davis, D’Agostino, Seyfried, Eenfeldt, and more. Mind = BLOWN. BIG TIME.

I have been hearing from more and more people out there on the Interwebs, and I think Jimmy has played a role in that. He has done more than just about anyone to publicize the lifesaving potential of low-carbohydrate and ketogenic diets. He is a true Southern gentleman, and I am so thankful to have connected with him.

P.S. You can read my Amazon reviews of books I did not receive courtesy copies of here*:

*Note: for any Amazon reviews where it does not indicate that it was a “verified purchase,” this is because those were books I purchased the old-fashioned way, in person, at an actual bookstore. (And even though Big Brother is everywhere these days, he still doesn’t tell Amazon when I buy a book at a brick & mortar bookstore, thank goodness!)

Remember: Amy Berger, M.S., NTP, is not a physician and Tuit Nutrition, LLC, is not a medical practice. The information contained on this site is not intended to diagnose, treat, cure, or prevent any medical condition.
Posted by Tuit Nutrition at 4:17 PM