Metabolic Theory of Cancer: Speculation on the Causes of Cancer -- and How to Mitigate Risk (Pt.2) 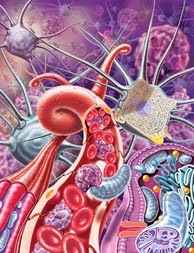 If the previous post in this series on cancer (before the video) was unsettling, good! It was supposed to be. It was meant to remind us that cancer is a vile beast, and that it can spring up seemingly from out of nowhere. It strikes people who are total health trainwrecks, and people who, by all accounts, are healthy. (That is, except for the cancer...) It strikes old people, young people, fat people, thin people, rich people, poor people, PhDs, high school dropouts, men, women, and everybody somewhere in between.

We are working under the theory that cancer is a metabolic disease. Something damages mitochondrial function to the point that cellular metabolism is derailed, and all the nefarious things cancer cells do can be understood as logical sequelae of broken mitochondria and cells that are fighting to keep themselves alive. (Anyone else hearing “Eye of the Tiger” playing in their head right now? Hehheh. [BTW…to anyone out there in the Philadelphia area, I did the Broad Street Run several years ago and someone on the sidelines about a mile from the finish line had a boom box and they were playing that song, and it was awesome. Especially because the original Rocky is one of my all-time favorite movies, but I digress. Adrian!!])

I left off last time saying that, according to the metabolic theory of cancer, anything that contributes to mitochondrial dysfunction can be considered a potential cause of cancer. I think the reason older folks tend to have higher rates of cancer is simply that their bodies have been exposed to potential cancer-causing dietary, lifestyle, environmental, and unknown factors for longer than younger people’s bodies have been. That stuff’s gotta add up over time, no? Frankly, in this day and age, I think if you make it to 85 without getting cancer, you’re kind of a living miracle.

But recall that I made a point to emphasize that babies and toddlers get cancer, too, so it’s not only a matter of physiological insults building up over time. And it’s not just eating too much vegetable oil, or slurping down too much sugar, or being sedentary, or smoking, or being exposed to too much radiation, or whatever else we might speculate could cause cancer. There are other factors at work here.


Okay. Let’s talk potential causes now. (If I leave out the word “potential” in the rest of this post and any that follow, please know that it is implied. Every time. I never want to state definitively that something DOES CAUSE CANCER, ‘cuz frankly, I just don’t think anyone can say that. I mean, there are smokers who don’t get lung cancer, right? And everyone’s got that crazy outlier grandfather or great uncle somewhere—you know the one—the guy who partied hard, smoked cigars, boozed it up, ate whatever was tasty, and died in his sleep with a smile on his face at 97 years of age. [He also probably dodged a few bullets and live grenades back in Dub’ya Dub’ya 2.] And that’s all well and good for the outliers. But most of us are gonna be somewhere closer to the middle of the bell curve, and I’m guessing we don’t want to assume we inherited those miracle outlier genes. [That’d be sweet, though.])

So let’s see what our good friends Dr. Seyfried, Dr. Flores, Dr. Poff, and Dr. D’Agostino have to say on the matter. This, my friends, is a GORGEOUS, beautifully simplified look at something that is quite complicated. (If it's difficult to see here on the blog, here's a link to the graphic in the paper itself, of which the whole text is available for free. If you look at the graphic this way, you'll be able to make it as large as you need to.) Toward the left, you'll see how multiple putative causal factors negatively influence mitochondrial function. You can see the mitochondria getting progressively more “messed up” (green circle --> orange circle --> red circle), and also how, at least according to these researchers, this mitochondrial damage leads to cancerous changes in the nuclear DNA, then resulting in all the nefarious things cancer cells do in order to stay alive.

Here’s the caption from the paper, with my emphasis added:

Mitochondrial respiratory dysfunction as the origin of cancer. Cancer can arise from any number of non-specific events that damage the respiratory capacity of cells over time. The path to carcinogenesis will occur only in those cells capable of enhancing energy production through fermentation (substrate level phosphorylation, SLP). Despite the shift from respiration to SLP the ΔG′ of ATP hydrolysis remains fairly constant at approximately −56 kJ indicating that the energy from SLP compensates for the reduced energy from OxPhos. (Note from Amy: in plain English, this means that the amount of ATP being generated by a cancer cell is pretty much the same as that from a healthy cell. The difference is, it is being generated via glycolysis & fermentation, rather than OxPhos. And remember: because glycolysis & fermentation are so much less efficient than OxPhos, the cell requires far more glucose in order to generate the same amount of ATP.) The mitochondrial stress response or retrograde signaling will initiate oncogene upregulation and tumor suppressor gene inactivation that are necessary to maintain viability of incipient cancer cells when respiration becomes unable to maintain energy homeostasis. Genomic instability will arise as a secondary consequence of protracted mitochondrial stress from disturbances in the intracellular and extracellular microenvironment. Metastasis arises from respiratory damage in cells of myeloid/macrophage origin. The degree of malignancy is linked directly to the energy transition from OxPhos to SLP. This scenario links all major cancer hallmarks to an extrachromosomal respiratory dysfunction. The T signifies an arbitrary threshold when the shift from OxPhos to SLP might become irreversible.

Here’s a closer look at that bit on the left. Like I said, we are working under the theory that these things (might) cause cancer by way of adversely affecting mitochondrial function.


We’ve already talked about age. Nutshell: the older you are, the longer your body has been bombarded by the myriad things that might cause the big C. As for germline mutations, recall that mitochondria have their own DNA, apart from that of the nucleus. (And for some added gee whiz info, we get all of our mitochondrial DNA from our mothers. [The reason an egg is so much larger than a sperm is because all the organelles and other cellular “stuff” that might eventually become a human being are contained in the egg.] Pretty much the only thing a sperm cell contributes is nuclear DNA. Way to go, fellas... Just kidding! In ways I cannot explain here, this has helped anthropologists and biologists research early human migration patterns.)

As for “germline mutations” causing cancer, I would guess this has more to do with mutations to mitochondrial DNA (mtDNA) than to DNA in the nucleus. According to the National Institutes of Health (NIH), 13 out of the 37 genes encoded in mtDNA “provide instructions for making enzymes involved in oxidative phosphorylation.” Now that we know cancer largely seems the result of impaired OxPhos, we can easily connect the dots between damage to mtDNA and cancer.


Those were the softballs. Since I’ve been failing miserably at keeping my promise to write shorter posts, I’ll end this one here. In the next few, we’ll cover some of the other things that might cause cancer, and how to mitigate those risks. (Notice I said mitigate. Not prevent, not stop. Mitigate. I think that’s probably the best we can do.)


Remember: Amy Berger, M.S., NTP, is not a physician and Tuit Nutrition, LLC, is not a medical practice. The information contained on this site is not intended to diagnose, treat, cure, or prevent any medical condition.
Posted by Tuit Nutrition at 7:26 AM