Cranberries: Get 'em Before They're Gone! 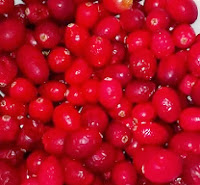 Like all seasons, fall and winter bring with them a bounty of foods that we identify with those specific times of the year. And if we choose to eat with the seasons, depending on where we live, we have to wait until the time is just right for some of those specialties to make their appearance: the first tender, green asparagus spears of spring; cherry tomatoes as sweet as raspberries in summer; squash, apples, and pears in fall; beets, carrots, and other roots in winter. You can, of course, consume these foods all year long, but you’ll pay more for them at the store and, frankly, they’ll taste like cardboard. (Not to mention they’ll be slightly less nutritious, having been shipped perhaps thousands of miles from where they were grown to arrive at your store. Some nutrients degrade over time, like when they camp out for weeks in warehouses or take very long-distance railroad or boat rides.)

But colder weather offers us two wonderful, nutritious, lower-carbohydrate fruit and vegetable options that we can enjoy all year long in the form of cranberries and pumpkin. I’ll leave pumpkin for another time. Today, let’s talk cranberries!


Considering Thanksgiving was two months ago, maybe you’re thinking it’s a little late in the game for this. I beg to differ. Could I have posted this back in October or November? Sure. But better late than never. I don’t know how things are at the supermarkets in your neck of the woods, but around my stomping grounds, there are still fresh cranberries available, mostly ones like this, bagged by the nice people at Ocean Spray:

So while it might be silly to be writing about cranberries in January, I wanted to get this out there while we can still buy ‘em, because they’re a great thing to stock up on to use all year long, and they will disappear from stores soon. There’s no reason to limit these delicious ruby orbs to fall and winter, and even less than no reason to let them grace our plates on just one day out of 365. They pair well with plenty of things besides turkey and all the fixin’s.

When it comes to cranberries, we tend to think only of the jelled form that comes out of a can, fully intact, molded into the shape of the can, complete with the ridges. The other way we usually encounter these little gems are in cranberry orange scones and muffins, or possibly in their dried form in trail mix or granola. But cranberries and sky-high blood sugar spikes don’t have to go hand-in-hand. In fact, in their natural state, cranberries are one of the lowest carbohydrate and lowest glycemic load fruits. It’s only thanks to copious amounts of sugar and high-fructose corn syrup that we think of cranberry sauce as super-sweet. Unadulterated and left to their own devices, cranberries are pleasantly tart, but have just enough sweetness to them that I have no problem eating them right out of the bag, as is. Yes, they’re a little tart, but not unpalatably so. There’s no pucker factor like there is with, say, sucking on a lemon straight-up. So that’s the first way to enjoy these babies: as they are, right out of the bag. (And if you end up eating half the bag, it comes with none of the guilt that might accompany, say, half a family-size bag of peanut M&Ms. Not that I know anything about that…)

But if plain, raw cranberries aren’t your thing, here’s a very simple way to transform them into something delicious. Something that can jazz up lots of other foods besides Tom turkey.

This is an über-simple recipe. Let’s cover the basics and then I’ll give some ideas on how to make it more interesting.

(By the way: the reason I recommended using an organic orange is because of the zest. If you use conventional, just wash & scrub the skin well. You can still use the zest; I just figure there are fewer wacky chemicals on the organic. Still some, but fewer.)

Pour the cranberries into a colander and give them a quick rinse. Also look through them; you never know when a tiny pebble or something might have made its way into the bag. Remove any berries that look iffy. There will be a few in every bag: they’ll be shriveled, soggy, and otherwise just not look like the others. All the rest are fine. Some will be very dark in color, some will be light, some might even be kind of whitish with red speckles. They’re all okay.

In a medium saucepan, heat the cranberries and half the water over medium heat until the berries start popping. (You’ll know what I’m talking about when it happens. You’ll hear it.) Once a bunch of them have popped, add the rest of the water and cook for a few more minutes, stirring now and then. (You can help the popping along with a potato masher if you’re so inclined, but it’ll happen on its own just fine. Stirring also seems to help.)
Off the heat, add the zest, juice, and pulp of the orange. (You don’t have to add the pulp, but why not? Seems a shame to throw it away.) Add sweetener if you’re using it. I didn’t give any recommendations on amounts there because that’s up to you and your desired degree of sweetness. (Go easy at first and keep tasting. You can always add more, but if you dump too much in, it's virtually impossible to get it back out.) Stir everything together, and that’s it! Yep, it’s that simple! No thickener required! When you transfer this to a container and pop it in the fridge, you’ll be amazed at how it thickens up all by itself.

I like my cranberry sauce chunky, but if you prefer a smoother texture, you can give it a whirl in your food processor or blender.


Ways to use this:

Like I said, cranberries are a fruit-craving low-carber’s best friend. Check out the stats: 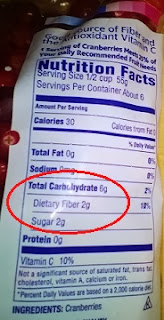 Just 6 grams of carbohydrate, with 2g of fiber, for a net carb count of just 4g per half-cup serving. Hard to beat that for fruit!

The other thing cranberries are famous for is urinary tract health. I don’t know the mechanism there, but I’ll look into it and report back if I discover anything worth sharing. All I know is, eating whole cranberries in any of the ways I’ve suggested here has got to be better for us (our urinary tracts and all the rest of us) than chugging cranberry juice cocktail, where these otherwise powerhouse berries have been robbed of their fiber and embalmed beyond all recognition with sugar.

So now that you know cranberries can be enjoyed all year long, go stock up before they disappear until next October. If you prefer to eat them fresh, they’re surprisingly hardy and will keep awhile in the fridge. (I had a bag in there for, no joke, about 3 weeks, and it was just fine.) But if you’re going to end up cooking them anyway, you can stick the bags in the freezer and they'll be good for months.

For a huge repository of both savory and sweet recipes to use cranberries, check out this link: Stalkerville - Cranberry. There are a few pages there, so don’t be fooled into thinking it’s just one. In fact, it looks like there are a bunch of good cranberry sauce recipes toward the bottom of page 4. (This is a Paleo/Primal recipe clearinghouse, so most of these recipes will be gluten/grain-free, even the cakes & breads. Some will be low-carb as well. But if you want some more conventional recipes, I trust you know how to work the Google machine.)

P.S. A word about cinnamon. I love cinnamon. I consider myself something of a cinnamon connoisseur, in fact. (As in, not “Do I want some cinnamon with my yogurt?” but, “Do I want some yogurt with my cinnamon?”) I like it on the spicy/hot side. The one I like best is from Penzey’s. It’s their house blend of cinnamon, which is a mix of Ceylon, Vietnamese, China, and Korintje cinnamons. Penzey’s has stores all across the country, so if cooking brings you the joy it does me, see if there’s one in your area. Good spices are one of life’s simple pleasures. (And at Penzey’s you can smell & taste everything before you buy!) I’ve also found this one at Whole Foods, and it’s quite good:

Remember: Amy Berger, M.S., NTP, is not a physician and Tuit Nutrition, LLC, is not a medical practice. The information contained on this site is not intended to diagnose, treat, cure, or prevent any medical condition.
Posted by Tuit Nutrition at 9:00 AM