Resurrection. Revival. Renaissance. They have slightly different definitions, but their general meanings are the same: being reborn, being infused with a new sense of vitality, even coming back from the dead. What do these have to do with this blog? This is a nutrition and health site, so why is it starting to sound like a church sermon? Am I about to ditch the beef tallow and bacon and head on down to the pulpit? No. So where is all this coming from?

Well, I had an experience with a plant a few days ago that got me thinking. (No, not that kind of experience…this is a PG-rated blog, thankyouverymuch!)  See, my niece and nephew bought me a very pretty plant for Mother’s Day this year. (The gift was all the more special because I’m not a mother, but they still thought of me. Or maybe they just pitied my poor little eggs, shriveling up and dying inside my cobwebbed ovaries. HA! Just kidding. I think I might have been born entirely without a biological clock. Either that or I can’t hear it ticking over the sound of me crunching on these. Also, being 7 and 8 years old, they probably just wanted to do something nice for their aunt and my mothballed lady parts never entered the equation.)

Aaaaanyway, this plant is pretty hardy. It survived a four-hour, 200-mile car trip from New Jersey to Virginia…barely. As I mentioned in  a previous post, my car’s air conditioning is broken. So this poor plant was basically in an oven the entire time, and boy, did it show. By the time I pulled up to the ol’ homestead in Virginia (just a phrase, as I live in a busy suburb and it’s definitely not a homestead, no matter how much I wish it would magically turn into one), the poor thing looked like it had seen better days. Much better days. I gave it some water, put it in the shade, soothed it with encouraging words, walked away and hoped for the best. And darned if the next morning, it didn’t look like a million bucks. (Or a really healthy impatiens. It was nice enough that the plant came back to life. It would have been a real miracle if it had turned into an actual million dollars.)

A similar thing happened just a few days ago and it struck me what a good metaphor it is for what I’m doing here. I’d neglected the plant a little because we’ve had so much rain lately. But when it’s not raining, it’s been about a zillion degrees. (To use the precise scientific term.) I’ve come to realize that this plant doesn’t do so well in the heat, especially not when in direct sunlight. This gal prefers the shade. So one morning as I was on my way out the door, I noticed she was looking a little peaked. But I had to hurry off to the park & ride to catch the bus and didn’t have time to go back in for water. So I told myself I’d water her when I got home. Well, by the time that happened—about eleven hours later—she was a sad, sad sight. Even worse than after the aforementioned car ride. But she’d come back from the edge once before. Maybe she could do it again. So I did the same thing—got her some water, talked to her lovingly, and left her alone in the shade. (Yes, I talk to my plants. They’re living beings, y’know. Plus, they can’t talk back! Now tell this aunt that’s not better than kids!)  And the next morning, she looked like THIS: 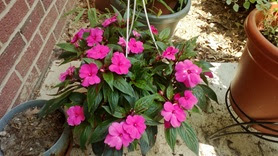 Flowers blooming, leaves nice and full. Literally, revived. (I don’t have any “before” shots. I wish I’d thought of it. But trust me, it was bad. So bad I considered tossing her in the trash right then and there. Can’t do that with real kids either. Another point for aunthood!)

Why am I telling you this? My point is that plants aren’t the only things that can have miraculous transformations. We can come back from the brink. We can be lost, hurting, scared, worried, and broken seemingly beyond repair, and we can come back.

I don’t know if there’s an area where this is more true than health. If you live in chronic pain and can barely get out bed because of joint and muscle stiffness…

If you’ve been following a low-fat, low-cholesterol diet, eating lots of whole grains, fruits, and vegetables, and spending all your free time exercising but still can’t seem to lose weight like all the formulas and equations say you should…

YOU CAN HELP YOURSELF.

It is never too late. No matter how: old, young, fat, thin, short, tall, silly, serious, smart, dull, courageous, timid, broken, or WHATEVER you are, you can come back from the brink. Do you hear me? You. Yes, you. You can reclaim your energy. Your fitness. Mornings without pain. Meals without indigestion. Days without blood sugar crashes.

Check out some of these success stories from people who transformed themselves a little later in life. It’s one thing for a twenty-something who’s already in decent shape to lose a couple of pounds. The inspiration level jacks way up, however, when we’re talking about older folks who’ve decided not to let their extra weight and various ailments keep them down.


It’s never too late to reclaim your health and vitality. But it’s not just an age thing. It’s a life thing. ‘Cuz let’s face it: older people aren’t the only ones with health challenges. Younger and younger people are facing heart disease, diabetes, autoimmune conditions, digestive issues, infertility, mood disorders, and a laundry list of other issues that suck a good deal of fun out of life.

That plant reminded me that it’s never too late, and there is no such thing as being too broken or too far gone. Whatever your obstacle, it can be overcome. If not completely, then at least reduced enough to give you a little more pep in your step.

That’s where the name “Tuit Nutrition” comes from, y’know. We can spend time wishing for better health, more energy, clearer thinking, a pain-free body, clearer skin, or just a smaller spare tire and less junk in the trunk, or we can DO SOMETHING to make those happen. We can get to it. (Or Tuit, as it were, hehheh.)
So what are you waiting for?  If your leaves are drooping, all your flowers have dried up, and your soil is parched, give yourself some proverbial water and shade, some encouragement, and maybe you’ll be revived, too. If that plant can come back after the way it looked, I’m convinced all of us can look and feel better than we ever thought possible.
For some inspiration, check out these other success stories. And these aren’t just the AARP crowd; they’re everybody. Young, old, large, small, very sick, not-so-sick, fitness pros, desk jockeys, and people with every ailment under the sun, from acid reflux to vitiligo. (And if there were a health issue that started with Z, the folks at Whole9 would have that covered, too…see what I mean in the first link below.) 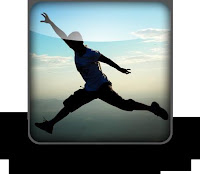 (And no, I don’t think everyone needs to eat the way the sites above indicate. I’m sharing these links only to show that positive changes do come to even the most seemingly far-gone people, when they find something that works for them.)

Need some inspiration in a part of your life outside of health and nutrition? I’ll be blogging about that in the future. (Along with the zillion other ideas I have rattling around the ol’ noggin.) I love writing about food and health, but I’ve also got a lot of thoughts to sort out about things that make for a happy life beyond what we cram down our pieholes. And who can I share those with if not everybody? (Or at least the four people who read this blog.)

Posted by Tuit Nutrition at 7:10 PM