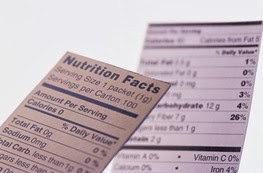 Hard to believe it’s Monday again. Back when I was in basic training for the U.S. Air Force (approximately a zillion years ago), we had a saying that went, “The days crawl by but the weeks fly.” I could say the same about not being in basic training, because despite the fact that time seems to come to a damn near standstill while I’m at my non-nutrition day job and I wait while each minute passes excruciatingly slowly, here we are again, drawing a slash through another Monday on the calendar. (Remember that, back when we all used paper calendars? If you have no idea what I’m talking about because the only way you’ve ever kept track of the passing of time is with some handheld electronic doohickey or other, go ask your mom or dad what it was like when we had calendars on paper. If you're feeling really curious, ask them about the origin of the phrase “dial the phone,” hehheh)

It’s hard to believe, but indeed, a week has passed since our last look at food labels to see what’s lurking in our foods. In case you missed the first one, you can check it out here. Today’s contestants aren’t too out there, but I think they’re still chuckle worthy. They’re both ketchup, and, believe it or not, my comments have nothing to do with the high fructose corn syrup. After all, that’s not a surprise. We all already knew it was in there. (In addition to regular corn syrup, of course. I guess one wasn’t enough.) 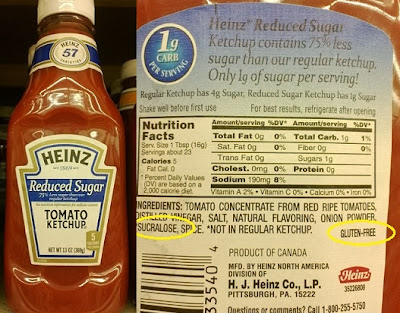 Maybe this reminds you of the first post in this series. Y’know, the one where I pointed out that Del Monte’s “no sugar added” canned fruit wasn’t unsweetened; it just wasn’t sweetened with sugar. Well, Heinz is up to the same antics. Their reduced sugar ketchup isn’t reduced in sweetness. They simply swapped out sugar for sucralose (which you probably know most commonly as Splenda, but that’s just one brand name for it). It’s funny, ‘cuz I have a homemade ketchup recipe that requires no sweetening at all. (I’ll post it some other time. It’s completely different from the ones I posted when I was super-new to blogging. I’ve been tinkering a lot since then and have hit upon one I really like. The texture and flavor are both better than the recipes I tested in that other post.)

Before we go any further, I must confess that I am not by any means ragging on Heinz. I went to college in Pittsburgh and lived there for a little while afterward. It’s the home of Heinz headquarters and, ketchup fiend that I am, Heinz and I have a very long, very loving relationship. That beautiful red deliciousness graced many a breakfast plate in my life. (And lunch and dinner.) And as long as we’re talking Pittsburgh, it accompanied many a Pamela’s omelet and Lyonnaise potatoes, and many an O-Fry. And getting back to basic training, I remember the first day I had time during breakfast to put some ketchup on my eggs. It was glorious. Glorious, I tell you. (Once you get used to inhaling your food whole while people are yelling at you to hurry the hell up, it frees up some time for condiments. By the time I graduated, I’d mastered the art of eating quickly and sometimes even managed to chew once or twice!)

Okay, so this one wasn’t that big a deal, just a little something worth noting. Before we move on to the next one, though, did you see the “GLUTEN-FREE” note on the label? Well thank goodness for small favors. Good on ya’, Heinz. You’ve managed to produce ketchup—tomatoes, spices, and a sweetening agent—with no gluten. No freaky wheat/rye/barley protein in this bottle. Just like I said about the mustard in the first Label Madness Monday installment, why would there be any GLUTEN in a bottle of ketchup? Ketchup, for cripes’ sake. *Sigh.*

But I digress. Check out the next one. Heinz No Salt Added ketchup. This is where things get interesting:

But just because there’s no salt added doesn’t mean this ketchup doesn’t taste salty. Say what?

See, they didn’t add any salt. No, instead, they added AlsoSalt! Not sodium chloride, but potassium chloride, even though only about 15% of the total population has sodium-sensitive hypertension (meaning  sodium intake has little to no effect on blood pressure in the other 85%) and there are a host of other reasons for high blood pressure that have nothing to do with sodium intake. And also never mind the fact that sodium is an essential nutrient, and the war on sodium is about as biochemically sound as the wars on cholesterol and saturated fat (i.e., not biochemically sound at all). So there’s no “salt” (or NaCl, sodium chloride, regular ol’ table salt) in this product. Fine. But they’ve added this newfangled mixture of potassium chloride and L-lysine monohydrochloride. Now, I’m not saying AlsoSalt is bad. I’m not saying it’s good, either. All I’m saying is, it’s new, and, if you ask me, it’s wacky. This additive was created only because decades of misguided nutritional advice have made people terrified of salt—natural salt, with sodium—a nutrient absolutely essential for good health. (Do you crave salt when you’re tired or stressed out? That’s because your adrenal glands love sodium!) Potassium is an essential nutrient, too, and L-lysine is just an amino acid, but still…I stand by my assertion of wackiness.

One more thing before I go: when I said they didn't add any salt, I'm not being chemically accurate. Potassium chloride is a salt. "Salt" is kind of an umbrella term for certain kinds of ionic compounds. The label should say, "No sodium added," but this is just me taking my anger out on the semantics. I get it. We're used to using the generic word "salt" to specifically mean table salt -- sodium chloride, the way some people say "Xerox" when they mean a photocopy, or "Kleenex" when they mean a tissue. Still--doesn't anyone work in Heinz's writing department? Someone who knows that sodium chloride isn't the only "salt" in the world? Maybe we should sue them for false advertising, because there is salt added to this ketchup!  ;-)

That’s it for now. Just our weekly reminder that they’re doing freaky things to our food, and the more we can prepare from scratch at home, the better—including condiments, because they refuse to stop conducting science experiments where we are the guinea pigs.


Remember: Amy Berger, M.S., NTP, is not a physician and Tuit Nutrition, LLC, is not a medical practice. The information contained on this site is not intended to diagnose, treat, cure, or prevent any medical condition.
Posted by Tuit Nutrition at 10:08 AM