In the spirit of how we recently turned our clocks back an hour (at least, here in the U.S.), with today’s look at label craziness, I offer the suggestion that it wouldn’t be such a bad idea to turn the clock back on food processing. Instead of everything being pasteurized, sterilized, irradiated, hydrogenated, fractionated, and otherwise just plain messed with, it would be nice if we could get back to when we all just ate REAL FOOD. Whole, unprocessed foods with simple ingredients the way they were meant to be consumed. I’m not completely badmouthing modern food technology. I don’t advocate taking a stroll down Salmonella Street or a brisk walk down Botulism Boulevard. (Listeria Lane? Clostridia Court? I could go on and on!) I’m simply saying let’s keep things safe but stop tinkering with things that don’t need tinkering! Today’s label is a pretty clear example of this, so here goes.

If you follow any sort of health and nutrition related news, you’ve probably heard that we should be eating fewer processed foods. It’s one of the only ideas all the warring dietary factions seem to agree on, whether they’re Paleo, low-carb, vegans, vegetarians, or dietitians  who advocate following the pyramid, plate, octagon, or whatever ridiculous shape they’ve decided the American people require this month to be able to make better dietary choices. So here’s an example of a processed food. As far as processed foods go, this one is actually quite tame. Compared to the less processed version we’ll look at after, though, this’ll seem less like food and more like an unfortunate accident at the chemical plant. 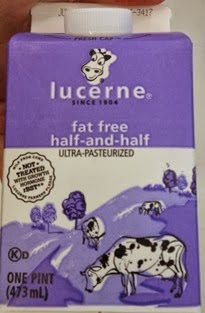 Fat free half & half. Half & half means half milk and half cream. Two items, neither of which occurs naturally without fat. So we know right from the get-go that shenanigans are afoot. (I won’t get into the details here, but think about this for a sec: did God, Mother Nature, the universe, evolution—or whatever you think is running the show—put fat in dairy foods to kill us? Did it put yolks in eggs to give us heart attacks? If it did, I don’t think we would have survived this long on this planet. After all, people weren’t consuming fat-free dairy products or isolated egg whites until recently…like, really recently. In our great-grandmothers’ time, in fact, the quality of milk was judged by how thick and rich the layer of cream on top was! They would have balked at skim milk and used their black, brick-like orthopedic shoes to beat some sense into any dairyman who dared to offer them milk with no fat in it.)

Okay, so since neither milk nor cream is fat-free, we know they’ve been processed in some way in order for Lucerne to advertise a “fat free” half-and-half. Let’s see what they did to it: 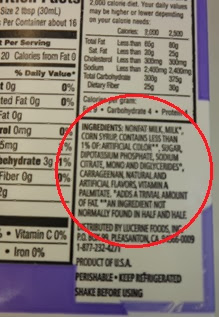 Corn syrup, artificial color, sugar, preservatives, mono- and diglycerides, carrageenan, and more. ARE YOU KIDDING ME?! A product that should have no sweeteners in it (aside from the naturally occurring lactose, or “milk sugar”) has TWO! Corn syrup is the third ingredient! What a shame. I was hoping to have my morning coffee without any damn CORN products in it, thankyouverymuch. And do you see the note at the end of the ingredient list? “An ingredient not normally found in half and half.” No kidding. You know why? Because REAL half and half has FAT IN IT, so it doesn’t need carrageenan or mono- and diglycerides to act as stabilizers and thickeners. That’s what fat does in the real thing. Y’know, the fat that comes with the milk and cream, as they are, straight from the cow.

Can I point out what’s probably the single wackiest thing on this label? Read the ingredients again. They added a bunch of weird junk that’s not in the regular stuff, but in the midst of all those additives, do you notice anything missing? (I’ll give you a minute to ponder this…)

THERE’S NO CREAM IN IT!! This half and half, which is supposed to be half milk and half cream, contains NO CREAM. Wow. Just wow. I’m not even sure what else to say about this.

I won’t get into the issue of organic vs. conventional dairy, grass vs. grain-fed, or the differences between raw dairy, pasteurized, and ultra-pasteurized. Those discussions have plenty of other websites and blog posts dedicated to them. My point here, as with this entire label series, is simply to lift up the rug on food labels and see what they’re trying to sneak past us.

So what’s in a product like this? Regular ol’ organic half and half? 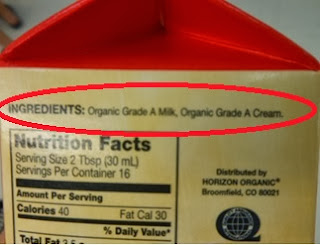 Milk and cream. WOW! Who knew it could be so simple? Compared to that other fat-free whitish liquid masquerading as milk and cream, what a breath of fresh air this is. Two ingredients. No thickeners or stabilizers required. No corn syrup, no sugar. Thank goodness for small favors.

But here’s the funny thing: how many calories and how much fat does the “fat free” version save you? 20 calories! A 2-tablespoon serving of the fat-free stuff saves you 20 whopping calories! I’ve probably flossed more than 20 calories’ worth of food out of my teeth after a big dinner! Sure, 20 is just half the 40 calories the full-fat version gives you, but come on. It’s not like we’re talking 500 versus 1000. Twenty calories are not a big deal. And even if they were, please tell me you’re not still hung up on calories, right? And where are those calories coming from? In the real deal, they’re mostly from fat. 3.5 grams, to be exact. In the über-processed version, they come from carbohydrate: 3 grams. Not especially high amounts of either, but still worth noting.

Remember: Amy Berger, M.S., NTP, is not a physician and Tuit Nutrition, LLC, is not a medical practice. The information contained on this site is not intended to diagnose, treat, cure, or prevent any medical condition.
Posted by Tuit Nutrition at 2:03 PM