Another week has blown by, and you know what that means:  time for the next installment of Label Madness Monday! Last time, I introduced the series and showed you some pretty ridiculous food labels. (Remember that? Oranges, pears, and peaches that were canned with artificial sweeteners because I guess nature didn’t make its candy sweet enough for our modern taste buds. Oy.) Last week I also mentioned that if your favorite grocery store shares initials with one of America’s founding fathers, then you were in for a rude awakening. I’m not here to bash Trader Joe’s. (I’ll save that for a separate post, hehheh.) The truth is, I buy food there occasionally, but it’s been getting harder and harder to find food there. Why? Well, I’ve noticed that you’ve got to navigate through massive piles of cookies, chocolate, frozen treats, and sugary candy masquerading as trail mix and granola in order to find the real food. Yes, TJ’s has a very nice selection (with great prices!) of meat, poultry, seafood, produce, and dairy, but they also stock a seemingly limitless supply of  junk. (Note: TJ’s is not alone in this area. If your other favorite grocery store shares initials with Will Ferrell, they are even more guilty.) But again, this series isn’t about the stores; it’s about the labels. So here we go.


Despite what you may have heard about soy, it is not a health food. Soy has numerous documented detrimental effects. It’s a legume, which, unless it’s properly prepared (via soaking, sprouting, or fermenting), makes it difficult to digest, leading to all the nice things we associate with eating legumes and beans:  gas, bloating, and possibly the runs. It’s also a goitrogen, meaning that excessive intake can depress thyroid function. Exactly what we don’t need in a society where we have epidemic levels of subclinical and full-on hypothyroid issues. Also, too much soy can affect estrogen levels in women and men. The reason soy is supposedly beneficial for post-menopausal women is because of its phytoestrogens. But what is that doing to young boys, men, and women of child-bearing age? If you don’t consume a ton of soy, I’m not dead-set against it. But there are certainly people out there who think they’re “being healthy” by drinking soy milk, using soy protein powders for post-workout shakes, and using soy substitutes for all manner of real food:  soy cheese, soy burgers, soy “chick’n,” soy jerky, and on and on. (I won’t touch the issue of genetic modification, but you can be fairly certain that unless the soy you consume is certified organic and/or verified by the Non-GMO Project, it’s made from genetically modified organisms. [What does that mean? In a nutshell, the plant itself has been engineered to contain pesticide so that they can use less spray on the crops.])

At some point, I’ll get around to writing a full-length post dedicated to the issues with soy. (Probably more than one post, in fact.) In the meantime, let’s look at labels. You’re probably thinking that whatever the deal is with soy, it doesn’t pertain to you because you don’t eat any soy. Really? Would you like to put a little wager down on that one? Just because you don’t drink soy milk, use tofu in your stir-fries, or eat all the ersatz “foods” soy has been manipulated to resemble doesn’t mean you aren’t getting more than your share of this bean. Start paying attention to ingredient labels and you’ll see soy in darn near everything. Even in your TURKEY MEATBALLS: 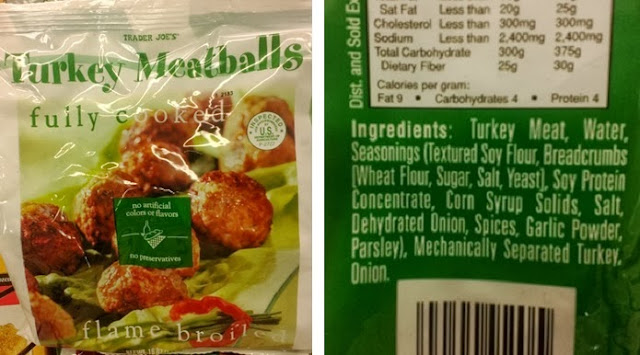 Your eyes do not deceive you. In these turkey meatballs, the third and fourth ingredients are soy. (Textured soy flour in the “seasonings” and soy protein concentrate coming in at number four.) Yikes! I wonder how much of the 12 grams of protein per serving come from the turkey and how much from the soy. Soy vey! (That’s what Jewish vegetarians say when they’re exasperated, hehheh.)

There it is again – soy protein isolate! Coming in at number four! 17 grams of protein per serving…and some of them might even be from real chicken! (Y’know, the ones that aren’t from the soy.) And just for good measure, they threw some soybean oil into the “balsamic sauce.” Protein and fat – is there anything this magical little bean can't provide us with?

The renowned Mayo Clinic lists soy among the top 8 food allergens. (Soy is so allergenic, in fact, that U.S. labeling laws require that foods that contain soy expressly say so on the label. This one says it very clearly because soy is one of the primary ingredients, but you’ll see “contains soy” on labels where soy is not explicitly stated among the ingredients [like in a spice blend or something like that.]) So if soy is so problematic, WHY ARE THEY ADDING IT TO EVERYTHING??! I realize that not everyone is allergic to soy (or shellfish, peanuts, or any of the other top food allergens), but even if no one was allergic, is there a reason we’re adding it to turkey and chicken products – y’know, besides the fact that we subsidize soy in the good ol’ U.S. of A., so it’s cheaper than dirt, and they add it to meat products to up the protein content while keeping their production costs down? See, this is why we’re better off avoiding food products and just buying FOOD. Food that doesn’t come in a box or bag, or, if it does, it has ONE ingredient: TURKEY. (Or CHICKEN.) You can buy chicken breasts, marinate them in balsamic vinegar, and grill ‘em yourself. Or buy ground turkey (which TJ’s sells at a great price, by the way, and it’s JUST TURKEY), and make meatballs yourself, with NO SOY! (Also easily with no breadcrumbs/gluten, but that is a whole other topic and we’re gonna wrap this up here.)

Let me be clear. I’m not ragging on this stuff altogether. It’s super convenient if you’re busy and want to get something on the table quickly. Is it better than home cooking? In my not-so-humble opinion, no. But is it better than rolling through the drive-thru? Yes, I believe emphatically that it is. So I’m not telling anyone they should never, ever buy these things. They’re great in a pinch. But let’s start being more aware of what we’re eating.

Food labels…it’s a jungle out there! 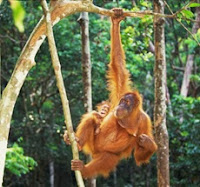 Remember: Amy Berger, M.S., NTP, is not a physician and Tuit Nutrition, LLC, is not a medical practice. The information contained on this site is not intended to diagnose, treat, cure, or prevent any medical condition.
Posted by Tuit Nutrition at 10:17 PM