The Truth About Weight Loss 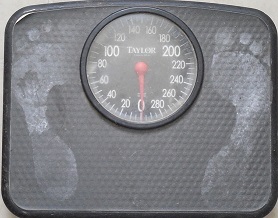 Much to the detriment of my sanity—and several of my brain cells—I’ve been lurking on weight loss forums, keto forums, LCHF sites, various Facebook groups, and other places where many participants are aiming for weight loss. I’ve been reading the comments, and…well, it’s a jungle out there, folks. A jungle of wishful thinking, unrealistic expectations, and a somewhat alarming degree of ignorance about how the human body works.

This is not entirely surprising, though, and I can’t be too hard on people for their pie-in-the-sky notions about how weight loss happens. After all, when you read a “Friday Success Story” on Mark’s Daily Apple, featuring a 25-year old guy who woke up one day, realized the steady diet of pizza, beer, and Chinese takeout he’d been following since freshman year of college had landed him 40 pounds heavier, with heartburn, acne, and no libido, and he stumbles upon The Primal Blueprint and summarily loses those 40 pounds in about three months—even while still enjoying wine and a weekly “treat meal,” it’s very easy to be hypnotized into thinking it’s this quick & easy for everyone. And if it’s not this quick & easy for you, then you’re “doing it wrong.” If every pound—every ounce—is a struggle, even when you’re really, truly “doing everything right,” then it’s perfectly natural to feel like a failure. To feel demoralized. And if your nutritionist cares about you and wants to see you reach your goals, it’s perfectly natural for me him or her to be demoralized, too.

I have been through this with several clients—to the point that I almost decided to quit altogether. However, after giving it a lot of thought, and racking my brain to think of what I could be doing differently to help these people, and why good diet recommendations and supplements proven to be effective weren’t working, here’s what I’ve realized:


The clients who fit this scenario—doing “everything right,” but not losing weight—have all been women. All of them. Most of them have been peri- or post-menopausal women, but some have been younger, like in their thirties. More importantly, all of them—all of them—were transitioning to a Paleo or LCHF diet after many years—sometimes decades—of undereating, whether intentionally or unintentionally. Specifically, they have been undereating fat and protein. Whether it’s women’s fashion magazines, mainstream news outlets, or even their doctors, something made these women so terrified to put actual foodstuffs into their bodies, that they have been subsisting, long-term, on 800-1200 calories per day, largely of non-fat and low-fat “edible food-like substances.” (Cereal, skim milk, fat-free yogurt, skinless chicken breasts, granola bars…you know the drill.)

The end result of this is that, sadly, these women’s resting metabolic rates are in the toilet. Through so many years of what basically amounts to starvation, they have likely lost a great deal of muscle, and certainly a significant amount of bone mass. (The physiology of fasting is different. Full-on fasting is not the same, metabolically speaking, as a very low-calorie diet, and the effects on “muscle sparing” are different . My posts are always already too long, so I’m gonna have to skip the details on this for now.)

This brings us to two issues:


We’ll address the first issue here, and we’ll tackle the second one in a separate post. (Maybe two or three separate posts, as I’ve already started jotting down notes, and there’s a lot to cover. Not as much as for insulin, though, thank goodness!)

Time for some more of my terrible homemade artwork! 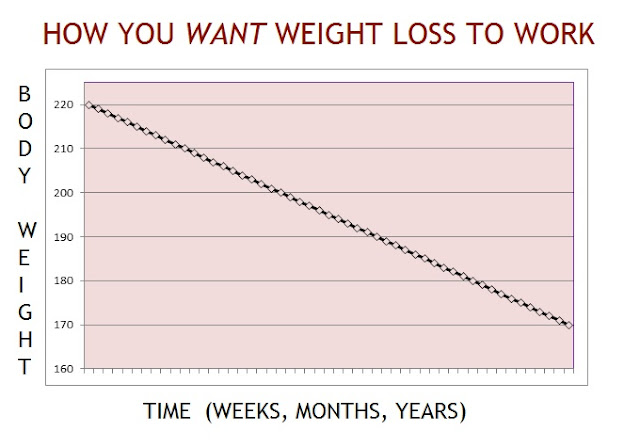 Nice, huh? You change your diet, maybe you start walking a little more or hitting things harder at the gym, going to bed a bit earlier, and PRESTO! Magical weight loss. A straight, downward slope from the day you implement these changes until you reach your goal, with absolutely no bumps, glitches, plateaus, or backsliding along the way. Fewer carbs, more steak; reduce corn & soy oils, increase bacon. That’s all you ever needed to do; you just didn’t actually do it until you stumbled upon Wheat Belly Total Health, or The Paleo Solution, or The Art and Science of Low Carbohydrate Living. Once you got started, though, it was clear sailing all the way!

Actually, it does work this way for many people. But for plenty of other people—most people, I would venture to say—it goes more like this: 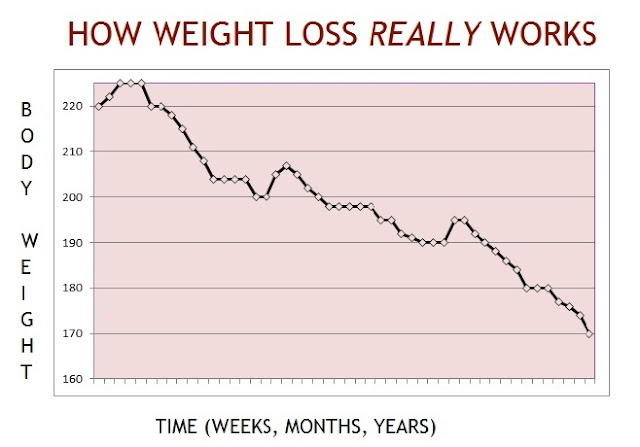 This hypothetical person has gone from 220 pounds to 170 pounds. That’s a loss of fifty pounds! (For my overseas readers, that’s almost 23kg!) Certainly a significant amount of weight to have lost, and something this person should feel great about!

But here’s the thing:

This is not a straight, downward slope. There are all kinds of hiccups along the way. We’ve got some stalls & plateaus, wherein weight stays the same for a while, and we’ve even got some weight gain here and there. (*Gasp!*) But when you look at the entire graph, the progression, over time, is downward.

What would have happened if this person had stepped on the scale every day during this time? The small day-to-day fluctuations would have driven them absolutely crazy. Being “stalled” for a week or two—or a month or two—or gaining a pound or two or four, might have even made him or her quit whatever program they were following, when, if they had just been patient, look where they would have been down the line.

This is what drives me crazy on those weight loss forums. Very few people seem to have an appreciation for the complex physiology of the human body, with its endless integrated connections and feedback loops. We are NOT calorimeters. We are NOT closed systems. You can’t provide an input somewhere and not have it adjusted for somewhere else. It’s like dropping a bowling ball onto a water bed; there is a ripple effect. (Or, to quote from one of the insulin posts, we are not cardboard boxes, where stuff gets put in, and stuff gets taken out, but nothing happens to it while it’s inside the box.)

Here are the two best pieces of advice I can give people who are struggling with weight loss—particularly if they are in the early stages of their LCHF/Paleo/Primal journey, and even more so if they are female, and are implementing one of these dietary strategies after many years of caloric (and PROTEIN!) deprivation:

Looking back at that second graph—the one about how weight loss really works in most people—you can see that, by getting on the scale every day, there’s a good chance you’d be setting yourself up for disappointment, confusion, frustration, and totally misguided self-loathing. (I mean, if you're going to hate yourself, at least hate yourself for a legitimate reason!  =D)

And you know what? If you could go back in time and plot a chart of your weight gain over some period of time, it would probably look much like this, except in reverse. It would certainly resemble this one more than the first one, where weight gain would have proceeded at a constant rate with no stalls or losses along the way. The reason we don’t realize the weight gain happens the same way as weight loss—with lots of ups and downs and plateaus—is because most of us don’t bother getting on a scale on a regular basis unless we’re actively aiming for weight loss. If we’re not trying to lose weight, most of us don’t much care what our weight is from day to day. (And if we know we’re gaining weight, most of us would avoid the scale altogether. The pants that no longer fit and the belts that are too small are evidence enough.) If we had gained, say, 40 pounds, over some period of time, the graph would include day-to-day fluctuations. We’d be up a couple of pounds, we’d be back down a few, and we would have stayed the same for a while. But over time, the overall trend would be upward.

It’s almost time to wrap this one up, but before I do, let’s talk about why there are these bumps along the road—the occasional weight gains, in particular.

As I said, I’ve worked with women who, prior to adopting a diet based in whole, unprocessed, nutrient-dense foods, were starving at the cellular level. (Yes, even with a BMI in the “obese” category, on the inside, they were starving.) They were depriving their bodies of sufficient total calories, and protein calories, in particular. And remember—these women have broken down a fair bit of very important tissue just to keep critical metabolic processes running. Add to this another issue I frequently encounter: poor digestive function. So these women were not only undereating, but whatever paltry amount of nutrition was present in the foods they were consuming was not necessarily being absorbed and assimilated into their bodies. So, when they finally start nourishing themselves and we work on improving digestion, their cells get the nutrients and building blocks they need, and all the rebuilding and repairing that was put on hold when nutritional resources were insufficient can now get done. It’s the body’s way of prioritizing things.

For example, if you lose your job and you don’t have a ton of savings in the bank, that is probably not the best time to redo your kitchen or install a hot tub in your backyard. You conserve. You save. You work with what you have and you use and reuse things until they fall apart. BUT, when you get a new job and are back to work—possibly with a better salary than before—now you’re golden. Now, you can do all the repairs and upgrades you had to put on hold when funds were low.

Your body works kind of the same way. If your body has to do triage, and attend first to what’s most important, guess which is more important, biologically speaking: restoring bone tissue that was broken down when you weren’t consuming (or absorbing/assimilating) enough protein, calcium, magnesium, boron, and vitamin K2—or making your *ss smaller and your thunder thighs a little less thunderous?

So, if you find yourself not losing any weight for a little while—or maybe gaining a couple of pounds—at the outset of transitioning to a higher-calorie, higher-fat & protein diet, and your dietary history fits the profile of the inadvertently starving female, thank your body for knowing what it’s doing. It is helping you. It is protecting you. It is making you healthy again. The fat will come off when there isn’t something physiologically more important to take care of first.

In posts to come, we’ll look at several answers to the question, Why am I not losing weight on a low-carb diet? We’ll also explore logical explanations for day-to-day multi-pound fluctuations in scale weight. (Another reason I need to stop reading forums & comments: poor, uninformed souls who lose all ability to think rationally when they find they’re up literally one or two pounds.)

NOTE: I have emphasized women in this post because I see this happening in women way more than in men. General consensus is that just about everything related to fat loss is more complicated for women. (Lucky us.) But men are not immune to this. If you’re a dude, and any of this resonates with you, right on! But it seems that men who stumble into LCHF/Paleo/Primal don’t usually come from a background of intentional or inadvertent caloric deprivation. Many of them were eating plenty; they were just eating the wrong things. If it doesn't resonate with you, sit tight. The "why am I not losing weight" posts will probably have more insights for you if you’re struggling with fat loss.

Remember: Amy Berger, M.S., NTP, is not a physician and Tuit Nutrition, LLC, is not a medical practice. The information contained on this site is not intended to diagnose, treat, cure, or prevent any medical condition.
Posted by Tuit Nutrition at 11:32 AM