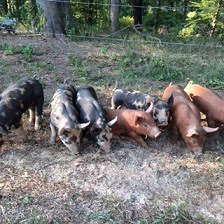 We need to talk about animals, everyone. Specifically, we need to talk about animals that we raise for food. You’ve probably heard the phrase, “You are what you eat.” And in the ancestral health and real food communities, we sometimes take this one step further and say, “You are what you eat, eats.” Most of us use this to convey the idea that we prefer to eat animals that have consumed their own natural, species-appropriate diets. For example, meat and dairy products from grass-fed cows, and, generally speaking, meat, fowl, and seafood that have not been fed rations of genetically modified corn and/or soy. (In the case of seafood, actually, no corn or soy of any kind. ’Cuz, really? Corn and soy? In the marine food web?)

When I say “species-appropriate diets,” I mean this: some animals are herbivores, some are carnivores, and others are omnivores. While herbivores (such cows and sheep) and carnivores (such as felines) can survive—at least for a time—on diets primarily made up of substances that are not plants or animals, respectively, eventually, problems will develop.

Over the last several years, consumers have become more discerning when it comes to how they spend their food dollars. Movies like Food, Inc., and books like The Omnivore’s Dilemma have opened at least a few people’s eyes to the larger issues around sustainable agriculture, humane animal husbandry, and more. Unfortunately, the average consumer still remains in the dark, and food manufacturers delight in taking advantage of this collective food label ignorance, laughing all the way to the bank.

The example many of us are familiar with is egg cartons that proudly proclaim the eggs they contain came from hens that were fed a vegetarian diet. Whoop-de-doo, right? Hens are not vegetarians. Most birds, in fact, are not vegetarians. The phrase is not, “The earlybird gets the lettuce,” but rather, “The earlybird gets the worm.” That’s right. Worm. From the animal kingdom. We’ve all seen images of mama birds holding worms in their beaks to feed to their babies. And let’s not forget penguins and pelicans, whose diets are largely [if not entirely] seafood, in the form of marine animals. And of course, there’s the ultimate expression of carnivory in our feathered friends: vultures. Yes, birds that swoop in after a predator is done eviscerating its prey to feast on whatever is left. Given a choice between millet and sunflower seeds, or a rotting animal carcass, I think we know which the vultures would prefer.

Attention: PIGS ARE NOT VEGETARIANS. I know this for a fact, because I have spent some time working on farms, feeding pigs, and talking with farmers who know way more about all this than I do. Trust me (and them): pigs are nature’s garbage disposals. They are one of the handiest animals to have on a farm, because they eat darn near everything. The farmhouse kitchen of every small farm I’ve been to has a bin/bucket for meal scraps. When you’re done eating, you scrape just about everything left on your plate into this bucket, and someone brings it out to the pigs daily. Vegetables, fruit, meat scraps, and even bones. Pigs eat the peels, rinds, ends, gristle, and all the other “stuff” we typically throw away. (Unless you have a compost bin.) The only thing I have seen pigs completely reject is swiss chard. (And I can’t say I blame them. Pigs are quite intelligent, y’know. And chard is pretty awful tasting, unless sautéed with lots of garlic and olive oil. And even then, I can think of about a thousand other things I’d rather eat.)

I don't deny that pigs eat lots of vegetables and fruit. They sure do seem to love cucumbers, peaches, and melon. But this does not make them vegetarians. They are voracious omnivores that will happily—and quickly—hoover up just about anything that gets tossed to them. (Except chard.) Case in point: the farms I’ve been to raise meat chickens from hatchlings, which they typically receive through the mail when the hatchlings are just one or two days old. (There is nothing more adorable than a cardboard pallet filled with tiny yellow fluffballs, better known as peeps, making the cutest little cheeping sounds. Also, for a gal born & raised in NYC, it was pretty cool the first time I was working at a farm and we got a phone call from the local post office saying that the chicks had arrived. Tee-hee!) Unfortunately, the journey from hatchery to farm is not always an easy one, and every batch typically contains a couple that didn’t survive the trip.

What’s a farmer to do with these poor, perished peeps? Have a tiny memorial service and bury them in the ground? No way. Those peeps make great pig food! Dead chickens of pretty much any size—whether newborn peeps, or slightly older ones who die for other reasons—are tossed to the pigs, and you should see how quickly those pigs pounce on those raw, whole chicks. Circle of life, my friends, circle of life. A little disturbing to some folks, perhaps, but those of us who eat animals owe it to ourselves—and to the animals—to understand how this works. This isn’t “gross;” it’s simply the animal kingdom.

And lest you think pigs are the only animals that would tear apart a whole, raw, dead chick, allow me to let you in on a little secret: chickens are ruthless. They will eat anything and everything you put in front of them, including their own. I haven’t seen this with my own eyes, but I’ve been told by farmers with years of experience that if we were to put those dead hatchlings on the grass by the older chickens, they would not hesitate for a second to start pecking at them with gusto. (Why? Because, say it with me again: Chickens are not vegetarians.)

I understand why manufacturers specify “vegetarian fed” on their egg and bacon packages. Several years ago, there was a major scare about cannibalism among animals causing nasty illnesses, such as bovine spongiform encephalopathy, or BSE—more commonly known as “mad cow disease.” (Fears about disease-causing prions and other stuff I don’t fully understand are also why it’s basically impossible/illegal to purchase animal brains for human consumption in the U.S. Land of the free? Not always.) And maybe it is a bit problematic when sick, “downer” cattle are fed to other cows. But in the grand scheme of things, pigs eat animals. Chickens eat insects. LOVE ‘EM. They love larvae, grubs, worms, and all sorts of other creepy, crawly, icky little critters. That’s why so many farmers (at least, the ones with integrated, multi-species farms) move their chickens or egg-laying hens onto the same parcel of pasture previously inhabited by cows. When insects lay their eggs on all the cow patties left behind, the birds absolutely go to town when those things hatch. Why? Because: chickens and hens are not vegetarians. And nope, neither are pigs.

As for the nitrate/nitrite issue, to be honest, I. Just. Don’t. Care. If you’re worried about it, buy fresh, uncured bacon. But don’t be fooled by bacon that is “nitrate-free,” or is advertised as having “no added nitrates.” These are most likely cured with celery juice or celery juice powder, which, guess what: CONTAINS NITRATES. This is simply not that big a deal. If you’re eating a ton of vegetables, you will get far more nitrates from produce than you will get from bacon. (In fact, celery is classified as having a “very high” nitrate content, as are beets. But beets have long been recommended as a health-promoting food, particularly for those with hypertension and other manifestations of endothelial dysfunction. And this is precisely because of the high nitrate content in beets. See, the nitrate is converted to nitrite, which is converted to nitric oxide, a potent vasodilator. [Meaning, it dilates the blood vessels, allowing blood to flow more smoothly, thus potentially reducing high blood pressure. Worried about all the salt/sodium in bacon negating the anti-hypertensive effects of the nitrates? Don’t be. Stay tuned for a few posts on sodium, once I’m finished with the cancer series.])

If you’re not inclined to read any of the PubMed papers linked to above, no sweat! Check out these layperson-friendly takes on the nitrate issue from  a couple of guys whose work I trust when it comes to stuff like this—one from the scientific standpoint, and the other from the culinary perspective:


At the risk of it seeming like I’ve singled out the manufacturer of the “100% vegetarian fed” bacon for doing something silly, let me go ahead here and say that I’d never tried their bacon until last week. I bought two different versions to try, and here’s the one I went for first:

It was friggin’ delicious.

They weren’t lying when they said “thick sliced.” This was about twice as thick as any “thick cut” bacon I’ve ever had, and it was nice and meaty. There was plenty of fat, too, but far more smoky, sweet & salty pork meat than I’ve ever had on bacon before. So as far as supermarket bacon goes, I highly recommend this one.

P.S. For the low-carbers and keto dieters out there, my take on bacon being cured with sugar is an emphatic: Meh. Most bacon is cured with sugar in some form: brown sugar, cane sugar, turbinado, etc. But the amount that ends up in the final product is pretty much nil. Basically negligible. If you’re following a low-carb diet and are avoiding bacon because you see sugar listed among the ingredients, to quote a meme I don’t especially like, but which is totally suitable in this case, “You’re doing it wrong.”

Remember: Amy Berger, M.S., NTP, is not a physician and Tuit Nutrition, LLC, is not a medical practice. The information contained on this site is not intended to diagnose, treat, cure, or prevent any medical condition.
Posted by Tuit Nutrition at 3:41 AM