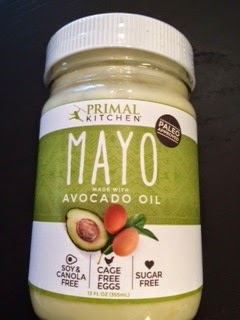 I have never made any secret of the fact that I’m not perfect when it comes to diet. In fact, with regard to eating not-so-nutritious things, I have a fair bit of experience. Most of the time, though, I do pretty well. If not by my own standards, then at least compared to the average soda-swilling, bagel-munching guy or gal on the street. I’ve been at this low-carb real food “thing” long enough that I’ve never found myself at a restaurant or dinner at a friend’s home and felt like there was nothing I could eat. I’ve learned to make my own no-sugar or lower carb versions of certain foods, and learned to make appropriate substitutions when necessary.

One thing I haven’t been able to replicate in a wholesome version is mayonnaise. Being pretty much just oil, eggs, vinegar, and maybe some salt and lemon juice, mayo is about as low carb as it gets. The problem with mayo isn’t the carb content; it’s the type of oil typically used in commercial brands. I’m not ashamed to say I’m a Hellmann’s gal. (That’s Best Foods to those of you west of the Rockies.) When Ina Garten, one of my favorite Food Network “celebuchefs” uses mayonnaise, she always says “Use a good mayonnaise,” and even though the network isn’t allowed to show the brand label on the front of the jar, you can clearly tell it’s Hellmann’s.

I have tried other brands. I’ve tried Duke’s, Kraft, and the store brands from Safeway, Giant, Trader Joe’s, and Whole Foods. I’ve tried mayo made with canola oil (gasp!). None of them even came close. A couple of those were okay; others were downright dreadful. I never bothered trying the olive oil mayonnaises. If you look at the labels, you’ll see that while they do contain a little olive oil, so the manufacturer can write OLIVE OIL in big letters on the front of the jar, they are still predominantly soybean oil. (Thanks to our generous tax subsidies, soy is super cheap for food manufacturers to use in their products.)

I’ve even tried making it from scratch a time or two. Let’s just say the results made me want to reach for the Hellmann’s even more. And frankly, considering my lack of dietary sainthood—and lack of desire to attain it—while I generally advise against consumption of large amounts of soy oil, if mayonnaise and the occasional blue cheese salad dressing are pretty much my only sources of it, I’m comfortable with that. (Let me pause while the gasps of horror subside and the whooshing sound in the wake of the purists getting up to leave quiets down.)


Okay. So yeah, I love mayonnaise, and I love Hellmann’s. But I always knew I could make the switch to something else IF it fulfilled the very tall order of having a similar taste and texture. So I am happy to announce that Primal Mayo, a creation from Mark Sisson’s Primal Kitchen, comes pretty darn close. Before anyone gets excited or annoyed, I have no jars to give away, and I am not an affiliate. I don’t have anything free to give you, and I have no financial incentive in getting you to buy some. This is my honest opinion, and nothing else. (In the interest of full disclosure, however, I will tell you that I received this jar of Primal Mayo for free. Not because I have a gigantic following and the Primal Kitchen folks thought they’d make a zillion bucks on it after I told my readership about it. No, we all know that Robb Wolf and his “six listeners” are way ahead of me and my three readers. The way this little jar found itself in my kitchen is that I was one of the lucky winners when Mark Sisson gave a bunch of jars away to announce the arrival of this product. Sweet!

So how does Primal Mayo stack up? It’s very good! It’s no Hellmann’s, but it was surprisingly—really surprisingly—good.

Here are the ingredients: You can see there’s nothing wacky here. Nothing you can’t identify, and nothing you wouldn’t be comfortable putting down your pie mayo hole. I’d never had avocado oil before, but the flavor here was dynamite. It didn’t taste like avocado at all; it tasted like, well, mayo. (And thank goodness, because I am the only person I know of on planet Earth who can’t stand avocados. Guacamole? No thanks. No big deal; it’s not like I don’t get plenty of monounsaturated fat from other sources.)

The first time I tried Primal Mayo, it hadn’t been refrigerated yet. I opened it the day it came in the mail. The texture was perfect. Maybe not exactly like the big-brand commercial mayos, but I was pleasantly surprised at the consistency, because that tends to be the biggest problem with homemade mayonnaise—it usually comes out kind of thin. Not so with Primal Mayo. Score!

UNTIL:  My jar of this great stuff seemed to separate upon refrigeration. I could clearly see a big layer of congealed oil on top. Bummer! No big deal, though; all it took to re-emulsify was a couple seconds of vigorous stirring. However, said vigorous stirring seemed to warm the mayo a little, which left the texture much more runny than it was before. It still tasted great, but as far as mayo goes, the texture was ruined. I am going to give Mark Sisson and the Primal Kitchen people the benefit of the doubt here. I am a huge fan, and I have to assume they did a ton of experimenting and testing with this, and the separation issue could well be because something’s wacky with my refrigerator. Even more likely than that is that I introduced some of my oral bacteria into the jar, and they threw a little party in there, resulting in separation of the oil. (What can I say? I live alone, and since the only person getting exposed to my jar-germs is me, sometimes I dip a spoon in something, lick it, and dip it right back in again. Oh, the humanity!) So my guess is this is probably what did it, rather than there being anything inherently off about the Primal Mayo recipe, itself. (Unless others have reported the same, in which case it is an issue.)

So, overall, if you’ve been looking for a mayonnaise with great flavor, but which may or may not have texture problems, Primal Mayo is a good way to go. For sure, if you want a good mayo with ingredients you trust, it’s a better-than-good way to go. Compared to what you find on store shelves—even places like Whole Foods, where you can get everything from organic canola, soy, and safflower mayo, to weird vegan mayo concoctions—it’s probably the best way to go, especially if you really enjoy mayonnaise but can’t bring yourself to stoop to my level and have the occasional Hellmann’s.

P.S. For the two of you (out of the three total readers) who are following the cancer series, I'll have a new post next week!

Remember: Amy Berger, M.S., NTP, is not a physician and Tuit Nutrition, LLC, is not a medical practice. The information contained on this site is not intended to diagnose, treat, cure, or prevent any medical condition.
Posted by Tuit Nutrition at 7:18 AM