Book Review: The Art and Science of Low Carbohydrate Performance 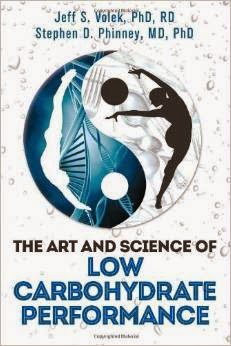 Volek and Phinney. Good ol’ Jeff and Steve. I don’t know them, personally, but sometimes I refer to them by their first names in my head, because I’ve read enough of their work that I feel like I do. If you’ve never heard the names Jeff Volek and Steve Phinney, let me ask you one question: just how big is the rock sugar-and corn-syrup covered mass of bread you’ve been living under? I say this because these two men are among the most influential and prolific researchers in the world of low carbohydrate nutrition, and if you have no idea who they are, I can only assume you’re still eating Frosted Flakes for breakfast (with skim milk, of course, because we all know the fat will kill you).

Don’t believe me? Do a little PubMedding and you’ll get the idea. (Yes, I just turned PubMed into a verb. Hey, if people can do it with “Google,” then surely I can do it with PubMed. Here are the results for Jeff Volek and here are the ones for Steve Phinney. These guys ain’t no slouches.)

These two partners in crime awesomeness are the dynamic duo behind the book, The Art and Science of Low Carbohydrate Living (which I will refer to as “Living”). Along with Dr. Eric Westman, they also authored The New Atkins for a New You. So yeah, these guys know their stuff.


The story behind The Art and Science of Low Carbohydrate Performance  (which I will refer to as “Performance”) is that after they wrote Living, they heard from a bunch of hardcore athletes who were like, “What about us, yo?! We want a book, too!” Meaning, they wanted these experts to specifically address the unique nutritional needs of nutjobs people participating in high-intensity and elite-level athletics: marathoners, ironman triathletes, century cyclers, but also just mere mortals like the rest of us, who maybe like to lift heavy, do some running, or participate in sports and want to perform at the top of our game.

(Why am I reviewing Performance when I haven’t posted a review of Living? Well, I read Living several months ago, and I just finished Performance, and I wanted to get a blog post up before the week was over. Performance is just a lot fresher in my mind, that’s all. And a lot quicker to write about, too. I do want to get back to fuel metabolism n’stuff, but I'm working on a project that takes up most of my writing time, and those fuel posts are no joke. They take a fair bit of time to write. So in the meantime, I'll try to at least get something posted at least once a week.)

Everyone knows if you’re going to run a marathon, you need tons of carbs, right? I mean, the pre-race pasta party is practically a marathon institution. What would the night before the big day be without shoveling bowl after bowl of spaghetti down the hatch? (Not to mention what the race itself would be without a pack of sugary goo/GU every hour, on the hour, plus a shot of Gatorade at every fluid station.)

But if you’ve been following this blog for any length of time, then you know the things we think we “know” because the “experts” have been telling us for years, sometimes don’t jive with the facts. Saturated fat doesn’t cause heart disease. Eating less and moving more isn’t a magical formula for losing body fat. So what if the time-honored concept of “carb loading” is a myth, too? What if there were a better way to fuel high-level athletics than constant feedings of sugar and starch? What if there were a way to not “hit the wall,” or, at least, hit it later than usual, and not hit it quite so hard? I know this sounds crazy, but it’s…well, it’s almost like there’s some other fuel that the human body could potentially run on. And it’s almost like this other fuel might be better to run on than carbs. Heresy, I know, but I think I’ve heard about this somewhere before…

Okay, enough with the preliminaries. Let’s see what Drs. Volek and Phinney have to say about all this. I’ll spare you the esoteric details about respiratory quotient, lactate threshold, oxidative stress, and other sciencey stuff. (If you want to geek out on those kinds of things, I’ll refer you, as I have before, to the king of geeking out on those kinds of things, Dr. Peter Attia. [And I say that with admiration. I have learned a ton from him.] Try this one and this one.)

Bottom line: when you follow a low-carbohydrate diet and your body is running mostly on fats and ketones, the efficiency of your entire fueling mechanism changes such that you can perform at a higher intensity for a longer period of time—and even recover more quickly—than when you’re stoking your fires with carbohydrates. No need for massive carb loading. (After all, if your body is running mostly on fats and ketones, and not on glucose, then you don't need to have your glycogen stores at max capacity the night before.) And no need for big boluses of carbohydrate post-effort, either, although if you wanted to have a bunch of carbs, post-intense effort is probably still the optimal time to do so. (Hence some of the more fun-oriented marathons that have beer at the finish line, hehheh. Or the time I went for cheesesteaks & fries after the Broad Street Run, a 10-miler I did in Philly a zillion years ago, long before I knew anything about any of this.)

I’m guilty of having said that a little bit of carbohydrate post-workout is a good thing, because it’ll raise insulin a little, and we need insulin to help bring amino acids into our muscles. So the general idea is that, post-workout, the best thing to have—for both glycogen replenishment and the “anabolic effect” of stimulating muscle repair and growth—is a combination of protein and carbs. Something like a steak and a potato. Or if you’re not into having real food after a workout, you could do a protein shake blended up with a banana, or cottage cheese and a bunch of fruit…that sort of thing. But here’s the thing: protein, all by itself, stimulates insulin. Not as much as carbohydrates do, but enough to get the amino acids into the muscle without additional carbs.

It’s almost like nature, evolution, or, if you prefer, the big voice in the sky, made/evolved/designed us this way. Think about it: let’s say we’re back in Paleolithic times, out on the savannah, looking for our next big kill. And let’s say we expend a lot of energy hunting our prey. (So you could say we’ve had a tough workout.) And we’re successful. Sweet! We got us a nice, fresh animal to haul back to camp. But, son of a beeyotch, those lazy cavewomen of ours sat around all day grooming their nails and didn’t bother to gather any sweet potatoes, blueberries, or honey. I guess we’ve got to eat all this animal protein without any carbs. Bummer. I hope nature put some mechanism inside us so we can use all these great amino acids in the absence of the carbs.

So yeah, no carbs required post-effort. (Again, I stress they’re not required. That doesn’t mean they’re “bad for you” if you want to eat them at that time, although if you plan to become a strictly fat- and keto-adapted athlete, you might want to rethink that. For a weekend warrior who’s not looking to break any world records and doesn’t mind if his/her performance isn’t the stuff of legends, metabolically speaking, that’s the time to have the red velvet cake yucca and parsnips.)

As the authors explain, it is “common practice that carbohydrates are added to protein supplements based on the belief that an increased insulin response will promote increased protein synthesis. In skeletal muscle, insulin has anabolic effects by increasing amino acid uptake and protein synthesis, but only a small amount of insulin is necessary to achieve a maximal effect. The primary driver of muscle protein synthesis is not insulin, but the availability of essential amino acids, especially leucine. Thus, shot-gunning a fast-acting sports drink loaded with sugar may not be the best strategy.” (p.67)

On another note, you’ve got to love a book where the authors do justice to the difference between the benign (and actually, beneficial) state of nutritionally-induced ketosis and diabetic ketoacidosis:  “Suggesting these two states are similar is like equating a gentle rain with a flood because they both involve water.” (p.35) Heck yeah! (Although the comparison I usually use, myself, is that nutritional ketosis versus ketoacidosis is like the difference between being just a little bit tipsy but still in full control of your faculties, versus being falling down drunk. There’s an order of magnitude involved there. Just because you’re drinking a little bit of alcohol doesn’t mean you’re flat-out drunk, and just because you’re generating some ketones doesn’t mean you’re going to lapse into a diabetic coma.)

As always, this post is getting long for a book review. So here are my main thoughts on The Art and Science of Low Carbohydrate Performance:

If you know nothing about low-carbohydrate nutrition, I wouldn’t recommend this book as your entry point into the concept. (You’d be better served by starting with Living, although even there, there are others I like better.) This is better for people who are somewhat familiar with the ins and outs of low carb, but want more information specifically tailored for the needs of people engaging in demanding feats of physical performance. That doesn't make it a bad book. On the contrary, it's pretty great, if you are the intended audience.

If you do already know how low-carbing works, but you thought it was only for people who needed to lose weight, and you’ve been afraid to give it a try because you’re a hard-hitting athlete and are already at a healthy weight/body comp, then I would recommend this book. You will learn enough to feel confident in making in the transition, but you won’t be overwhelmed by data and scientific jargon. They do cover some studies that show excellent results with athletes on LC diets, and it’s important that these are included, to show you that this isn’t pie-in-the-sky thinking, and it’s not based solely on experiments with rats and isolated cells growing in test tubes. Volek and Phinney have both conducted experiments in real, live human beings—high-level athletes and the “untrained” alike—and low-carb gives a performance advantage damn near every time.


My only complaint about this book is that there are many, many typos, which do a real disservice to these two distinguished men. Either they had no editor at all, or if they did have one, he/she was asleep at the wheel, big time. (Perhaps they weren’t eating enough fat…) There were several typos, and while they don’t take anything away from the factual content of the book, it’s disappointing to see such glaring errors in this finished product. Just to show you I’m not kidding, here’s my favorite example of a big-time error. (There are two here, but one stands out much more.)
It’s bad enough this was a “mocca” smoothie, and not a mocha smoothie, but that pales in comparison to having to scoop frozen coffee out of your bowel. Yikes!  (Seriously…did these guys have NO proofreader?)

Remember: Amy Berger, M.S., NTP, is not a physician and Tuit Nutrition, LLC, is not a medical practice. The information contained on this site is not intended to diagnose, treat, cure, or prevent any medical condition.
Posted by Tuit Nutrition at 9:18 AM