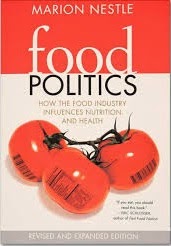 Here I go with my book learnin’ again! I reviewed Dr. Marion Nestle’s Food Politics for the spring 2014 issue of Wise Traditions, the journal of the Weston A. Price Foundation. You can read it here, or feel free to hop on over to their site and read it there. (I recommend staying here, though. I think they edited it a tiny bit. Plus, their site doesn't have the nifty links I’ve included.)

Before we get into it, let me just say that I am probably the only person on the planet who’s read this book for fun. (Well, maybe not for fun, but not for school, either. Let’s chalk it up to personal education.) This book is probably required reading in many university nutrition and dietetics programs. I’m glad I wasn’t forced to read it, because that would have made this dense tome that much more of a struggle to get through. It was difficult enough doing it for my own reasons. That being said, it was educational. I learned a lot about the devious back-door deals that are what ultimately drive the U.S. government's national dietary recommendations. (I assure you, they have almost nothing to do with actual human physiology and biochemistry.) And I also learned that even the most impressively-credentialed professional (i.e., the author of this book) can completely ignore scientific facts in favor of the political games and sweeping generalizations she claims to abhor.

If my review hadn’t been intended for the WAPF journal, there would have been lots of sarcasm and possibly a few swear words scattered throughout it. Where the book is good, it’s great, but where it’s bad, it sucks the big one. Frankly, at times I just wanted to shove Dr. Nestle’s face in a biochem textbook. (Note: she has no relation to the mega-huge food corporation of the same spelling. Her name rhymes with trestle, like train trestle, not like the Crunch candy bar or Toll House cookies.)

And with that, on with the show!

Marion Nestle is one of the most well-respected and frequently quoted authorities on food marketing and government nutrition policies. She is a professor in New York University’s Department of Nutrition, Food Studies, and Public Health, and was the department chair from 1988-2003. Her CV is an impressive list of academic and professional credentials, publications, honoraria, and awards. Food Politics, one of her most well-known works, is an in-depth and damning expose of how food companies, lobbyists, government agencies, and congressional representatives often serve their own interests at the expense of public health. Unfortunately, her unquestionable expertise in these political matters is clouded by her blanket condemnations of saturated fat, cholesterol, and salt. Her clinging to these outdated beliefs overshadows what is otherwise an excellent treatise on the often invisible forces behind national nutrition policy.

Dr. Nestle explains the all-too-familiar revolving door between food companies, lobbying firms, and the highest echelons of government. The employment in regulatory agencies of individuals with long professional and financial ties to food processors is a glaring example of the fox guarding the henhouse. The same could be said for food industry sponsorship of the Academy of Nutrition and Dietetics (AND, formerly the ADA, American Dietetic Association). Nestle takes the AND to task for this supreme conflict of interest, and mentions registered dietitians who are uncomfortable with the obvious implications but feel powerless to influence the larger organization. (Update: If you want to know how bad it really is out there, check out this story from just a couple of days ago on how the California Dietetic Association’s annual conference was sponsored by…get this…McDonald’s. No, I am not kidding.)

The author does an excellent job of explaining the difficult balancing acts that lead to stunted, wishy-washy recommendations to “eat less” of and “cut back” on certain foods, while emphasizing that balanced diets have room for everything—in moderation, of course. (Never mind that no one seems to be able to tell us what, exactly, that means.) Recommendations to eat less meat, for example, upset the large lobby of cattlemen and ranchers, not to mention small farmers at the local level. The same goes for eggs, butter, sugar, salt, and any other whole food or single ingredient: each one has an interested party whose members not only vote, but make generous cash contributions to political campaigns. In this environment, it’s difficult for public health organizations to produce a strong, consistent messages that are bound to ruffle financial feathers.

And speaking of consistent messages, Nestle details turf wars between the FTC, USDA, and FDA over which agency is responsible for regulating print and TV food advertising, supplement labels, health claims on food packages, and more. She devotes time to DSHEA, the Dietary Supplement Health and Education Act, which largely governs the claims that can be made for vitamin, mineral, and herbal supplements and foods that contain them. The act’s stipulations, along with other regulations, explain why these claims are typically either vague (“may help support the immune system”) or so circuitous as to be nearly meaningless (“supportive but not conclusive research shows that eating 1.5 ounces of walnuts per day, as part of a low saturated fat and low cholesterol diet and not resulting in increased caloric intake, may reduce the risk of coronary heart disease”).

Dr. Nestle particularly shines in the significant space she devotes to food marketing aimed at young children. She points out that children are often unable to distinguish between commercials and programming, and the ethics are murky when commercials for unhealthy snack foods are aired during popular children’s shows. Much more pervasive and potentially harmful than this low-level tactic are the business arrangements entire school districts have made with food manufacturing conglomerates. Middle and high school students are a tempting and captive audience. Nestle lifts up the rug on how soda and snack companies make deals for exclusive “pouring rights” and vending rights across school districts (wherein only their products, without competition, are offered in vending machines and school lunch line snack bars). In exchange for access to this huge, unfettered market for their products, they sponsor events and supply cash-strapped schools with computers, AV equipment, sporting equipment, and upgraded facilities. Nestle details how tantalizing these arrangements are to superintendents of school districts with multi-million dollar budget shortfalls.

These aspects of the book make for enlightening—if, at times, dense—reading. However, these important issues come with a hefty dose of nutrition misinformation. Dr. Nestle is part of the old guard, clinging tightly to outdated views on saturated fat, red meat, cholesterol, and full-fat dairy. She seems to have a knee-jerk reliance on the old standard of “eat less, move more” as the key to getting to and maintaining a healthy weight. She makes no mention whatsoever of the different hormonal effects of fat, protein, and carbohydrate, nor of the powerful role these play in the regulation of appetite and body fat storage and mobilization. One thing she does nail on the head, however, is that food companies too often like to “blame the victim,” and tell us that body weight is a matter of personal choice and personal responsibility, thereby absolving themselves of any role their pervasive advertising and well-researched marketing strategies might have in making it harder for the public to make good choices. The truth is, feeding ourselves well is about personal responsibility, but it’s easier to make better choices when we’re not bombarded with advertisements extolling the virtues of soy, vegetable oils, and sugary breakfast cereals.

Food Politics is an important work. Unfortunately, while Nestle reveals the back-door deals and “follow-the-money” games that craft nutrition policy and, ultimately, the products we see at the store, she does so while continuously harping on her nutritional bad-boys (red meat, cheese, butter, eggs, etc.), as if the science were settled as to what causes obesity, heart disease, and many other modern ills. As readers of this journal know only too well, the science is far from settled, and more cracks appear daily in the brick wall of the low-fat, low-cholesterol, grain-centric diet. It is disconcerting that someone with a PhD in molecular biology—particularly someone who has such broad influence in the popular media as well as in the classroom—has failed to stay current on the scientific literature.

The author states in the appendix, “The optimal ranges of intake of specific nutrients can be estimated only for populations. Optimal intakes for individuals are difficult to define; people vary in requirements for genetic reasons, and also because diet interacts with other factors that affect the use of nutrients, such as smoking cigarettes, taking medications, and being physically active.” Despite this, Dr. Nestle seems to rely on the now-defunct food pyramid to guide everyone. She refers often to the virtues of the complex carbohydrates, vegetables and fruits that make up the bulk of the pyramid, while using the phrase “top of the pyramid foods” for things like fats, oils, and sugars, which she would likely recommend everyone  limit, regardless of weight, disease condition, genetic propensity, or metabolic status. She pays brief lip service to the need for individualization in dietary planning, but the majority of the book shows her to be firmly entrenched in conventional blanket recommendations.

She also says, “Nutrition is a thinking person’s field, requiring critical analysis at every step of learning and interpretation, as well as an unusually high tolerance for ambiguity and uncertainty.” I couldn’t agree more. Unfortunately, Nestle doesn’t seem inclined to engage in critical analysis of the government’s nutrition recommendations of the last half century. She is quicker to suggest that people have become more overweight and chronically ill because they’re not following the recommendations, rather than entertain the possibility that those recommendations are flawed.

Dr. Nestle should stick to what she does best: calling out both private industry and government agencies for their collusion in crafting toothless legislation that emphasizes personal choice, balance, and moderation, while doing everything they can to increase profits and encourage people to buy and eat more. I have no argument with the author on these issues. But if I were an overweight diabetic, I wouldn’t trust her to be my nutritionist. She would no doubt encourage me to eat lots of “healthy whole grains,” polyunsaturated vegetable oils, and limit my intake of the animal foods that have nourished healthy, robust, physically fit people for thousands of years.