Financial Food Facts at the Farm 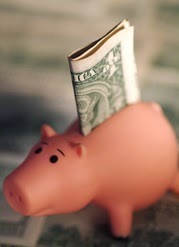 In some of the posts in my series on food labels, I’ve pointed out how expensive processed foods are. Manufacturers generally start with raw materials that are extremely inexpensive for them (thanks to our tax dollars, which subsidize corn, wheat, and soy), and after tinkering with these simple inputs—usually by adding sugar, corn syrup, and artificial colorings and transforming them into things like cereal, granola bars, protein shakes and bars, and the like—they jack up the price by multiple orders of magnitude. In other words, like I showed in the oatmeal post, they start with an input that they can sell for less than a dollar a pound, and after adding a ton of sugar and some spices, they turn around and charge over twelve dollars.

People who are unfamiliar with buying and preparing whole, unprocessed foods often use the excuse that foods like meat, pork, poultry, and seafood are too expensive. This can be especially true if we’re talking about very good quality foods, from animals that were raised humanely, on species-appropriate diets. (As I’ve pointed out in the past, this means cows eating grass or dried hay; chickens and hens eating grain-based feed but also pecking around in the grass for the grubs, worms, and insects that make egg yolks so nutritious; and pigs foraging for just about anything they can cram down their little piggy pieholes.) I would argue that compared to commodity crop-based processed foods, regular ol’ conventional meat, dairy, and other foods you can find at the supermarket are not expensive at all. I’ve seen red meat and pork chops on sale for as little as $2.99/pound, and boneless skinless chicken breasts regularly go on sale for $1.99/pound. (Not that you’re eating those, right? Talk about boring, bland, and blah.)

But for people making a transition to “the real deal” in terms of grassfed meats, pastured poultry and all that jazz, the prices aren’t quite that low. That said, they’re not as high as you might think, either.

A few weeks ago one of my favorite farms was having a good sale, so I took a trip out there to stock up. (If you live in Northern Virginia, check them out.) 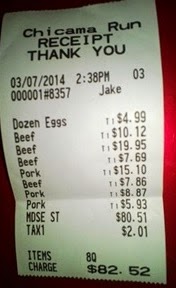 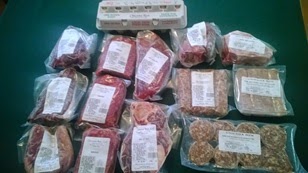 Depending on your point of view, this will look like quite a lot, or not a lot at all. So to clear things up, let’s break down the price and see where this falls on the “real food is expensive” spectrum.

My $82 and change covered the following*:

*I forgot to weigh the eggs before I started using them, so I'm not sure how much the weight of a dozen was. It was at least a pound, though, so I've put the estimate at a conservative 1.2 lbs.

I’ll save you the trouble of doing the math. This is a total of 16 pounds of food. $82.52/16 = $5.16/pound. Five-sixteen. That’s not much at all! Particularly for the best quality stuff. I paid less per pound for this wonderful, nourishing bounty than they charge for dextrose-embalmed ham and turkey breast at the supermarket deli counter. (That stuff regularly goes for $7-$10/pound.) I think it helped that the tongue and heart were on sale for $2/pound – ridiculous!! (In a good way.) And ground beef is normally only $5.99/pound at this farm, which is pricey compared to the $2.99 you can score it for at Trader Joe’s, but this is grass-fed, grass-finished, and I’d say that’s pretty darn reasonable.

As if all that gorgeous, nutrient-dense food wasn’t enough for $82, I got more than my money’s worth by spending a while at the farm getting up close and personal with the animals. (But not that personal, HA!)

Call me a total dork, but I honestly believe these gentle creatures could sense that I needed a little love that day. I cannot stress how therapeutic it is for my fried and frazzled urban soul to get out to this place once in a while. In a former life, I spent about six weeks interning at Over the Moon Farm in Central Pennsylvania and had pretty much the time of my life. Maybe I’ll write about it sometime. For a gal who was born and raised in New York City, I have an awfully strong affinity for country life, farm animals, and vegetable gardens. (Step one: win lotto. Step two: purchase homestead. Step three: never sit in city traffic again, except possibly when driving to/from a farmers’ market to sell my wares. Until then, I am living vicariously through Liz Wolfe, who, along with her husband, chucked her urban existence, bought a rural homestead, and is now raising animals, having wacky country adventures, shedding a lot of sweat and tears, and overall just living her dream.)


And speaking of farmer's markets, check out this post from last summer to find out why I like buying straight from the producers. Nutshell version: I like knowing that my money goes directly into the hands of the people that grew, raised, and produced the vegetables and fruits, meats, and artisanal food products I buy. No middle man, no huge corporation's marketing and PR departments siphoning off a percentage of the profits so that what ends up trickling down to the people who did the backbreaking work of making the stuff is barely a pittance. </end rant>


*The farm is about 40 miles from my house, so we’re talking an 80-mile round-trip drive. The $82 cited doesn’t include the cost of gas. Since I had the pleasure of walking around the farm for a while and reveling in the country air and sounds and smells of the animals, I’ll chalk up any extra spent on gas to less than it would’ve cost to see a movie that afternoon, indoors, staring at a screen. (I do more than enough of that at work, minus the movie, of course. I can stream YouTube videos at work, but I have to draw the line somewhere.  <--Need to be a good steward of government funds and all that.)


Remember: Amy Berger, M.S., NTP, is not a physician and Tuit Nutrition, LLC, is not a medical practice. The information contained on this site is not intended to diagnose, treat, cure, or prevent any medical condition.
Posted by Tuit Nutrition at 11:03 AM