Awesome Cuts of Meat You're (Probably) Not Eating: Beef Tongue! 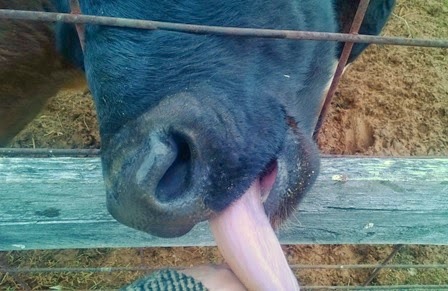 I know what you’re thinking.

Amy, first you told us to eat beef shanks—including the super-scary bone marrow that comes with them. As if that wasn’t enough, then you told us to cook chicken livers. LIVERS, for crying out loud! But this—this might be too much.

Are you actually, seriously, with a straight-face, telling us to eat TONGUE?!

(Just kidding about the 18 thing.)

Believe it or not, beef tongue is very common in Latin American cuisine, where it is called—no surprise—lengua. (Spanish for tongue.) For reasons we’ll get to in a bit, it works especially well in tacos. Tongue is also very common in Jewish delis, where they cure/brine it, slice it, and stuff it between pieces of rye bread, just like corned beef and pastrami.

You might be feeling slightly terrified right about now, and I can’t blame you. However, beef tongue is a fantastic way to ease into trying strange cuts of meat you’re unfamiliar with. It has none of the gamey and straight-up funky flavor that turns millions of people off of liver, and not as much stigma and just plain fear as surrounds eating things like, say, tripe or brains. (If you think you might be scared of intestines, rest assured you’ve probably already had some—assuming you’ve ever consumed a sausage or hot dog in “natural casing.” If it snaps when you bite into it, they did something right.)

The texture of tongue is more like muscle meat. This is because the tongue is, in fact, a muscle. If you didn’t know that, I guess you haven’t had a marathon makeout session lately. (Join the club.) If that’s not in the cards for you at the moment, just pay more attention next time you eat something. Depending on what you eat, your tongue can get quite the workout. (Think peanut butter sandwich.)

Before we get to cooking la lengua, let’s take a look at one of these bad boys. 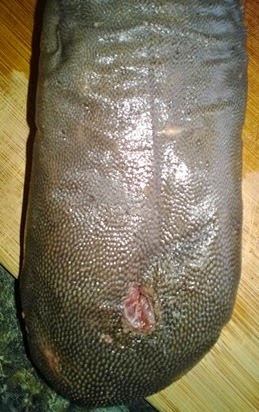 See the taste buds? Eek! Proof that this is, in fact, a tongue. But don’t worry—you don’t actually eat the taste buds. More on that when we get to cooking this.

And here’s the underside.

See all the gnarly looking connective stuff? Just like with beef shanks, that connective tissue is part of what makes tongue such a well-rounded and nourishing cut. You’ve got the full complement of amino acids, but you’ve also got some of that good collagen, too, and a little bit of fat.

Okay, so what can we do with this? (Besides leaving it on the coffee table as a conversation piece. That would be cool for a day or two, but eventually this thing would start to smell.)

Like the shanks, beef tongue is a cut of meat that is virtually impossible to eat any other way except cooked low and slow. (Unless you have the magic machinery they use in those Jewish delis. I have no idea how they transform it into cold cuts. I am a disgrace to my heritage and bow my head in shame. Oy vey!) All the connective bits are practically impossible to gnaw through, but the long, slow cooking method makes it chewy and soft and completely accessible to human chewing. So when it comes to cooking perfect tongue, a slow cooker should be your go-to cooking vessel.  And just like with the beef shanks, once cooked, use a slotted spoon to transfer the meat and vegetables to a separate container (glass, preferably, if the contents are still raging hot). Pour the liquid into a separate container (or keep it in the slow cooker bowl if there’s room in your fridge). Leave it in the fridge for a while and the fat will rise to the top and solidify. There won’t be much, since tongue isn’t an especially fatty cut, but there will be some, and in the interest of nose-to-tail eating and honoring the sacrifice and blah, blah, blah, you might as well scrape it off and freeze it to use as a cooking fat some other time. (Remember, this is tallow—one of the most old-school cooking fats there is. Your great-grandma would be proud!)

The connective tissue in the tongue means that the liquid left in the slow cooker might gel during refrigeration, but this depends on how much liquid you include for the cooking process. I added a fair bit when I made this, so it didn’t gel, but it still thickened a little bit. (And just because it didn’t gel and “set” doesn’t mean the good stuff isn’t still in there. It was simply diluted by the amount of liquid I added.)

Like so many of the laughable cooking suggestions I’ve posted in the past, this really isn’t a recipe. It’s more of a recommendation. And it includes my slow-cooker quadation. (I just invented that word: it’s a foundation made of four things: onions, carrots, celery, and tomatoes. In culinary circles, carrots, celery, and onions are commonly referred to as a mirepoix, or also “the trinity,” but since I have four things, I had to come up with something else. The quadinity? Yeah, that's better.)

For a ridiculously easy-peasy way to make tongue absolutely delicious, here’s what to do:
Place the onions and about two thirds of the carrots and celery at the bottom of your slow cooker. Sprinkle some salt and freshly ground pepper on the tongue. Set the tongue on top of the vegetables and add the rest of the carrots and celery. Pour over the tomatoes, add a little more salt and pepper, and let ‘er rip! (Feel free to add cumin, garlic, paprika, or whatever else you think would work.) The way I did it was one hour on high, and then four more hours on low. (It was probably done after three.) If you want to do it all on low, it could probably go for four or five hours. Slow cookers are so forgiving; it’s hard to overcook anything in them, so don’t overthink this.

We are about to enter a brave new world of tongue-y magic, but before we get there, we’ve got some grooming to do. If you recall, earlier I said that we don’t eat the taste buds. So we’ve got to remove them. Fortunately, this is very easy and not at all as creepy as it sounds. Basically, we remove the entire outer covering of the tongue. You might need to slip a knife under it to get things going, but once you make an initial cut, you should be able to peel off the entire outer layer easily with your fingers. (Don’t bother saving it for stock; it’s already given its all right here in the slow cooker. And don’t feel guilty for throwing it away. I mean, come on, we’re already eating this animal’s tongue, for crissake, and saving the fat for future cooking. I’d say that’s plenty good enough for the nose-to-tail philosophy—never mind the more important fact that you cannot chew this stuff. [I took one for the team and tried. Take my word for it. Un-chewable.]) 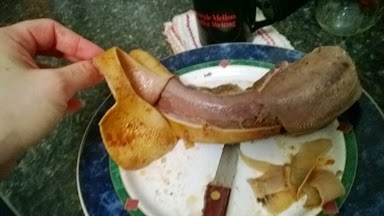 Despite the phallic appearance, I assure you this is a cow’s tongue, and not the nether regions of a man who wronged me in a former life.

Now here’s where we get to the magic. Once cooked, there are two main ways to cut this meat. You can slice it against the grain and you’ll wind up with nice chunks. Or, you can shred it, and it will have the look and consistency of pulled pork. (Actually, it’s even more tender than pulled pork. A slow-cooked beef tongue is probably one of the softest, most melt-in-your-mouth meats you'll come across. If you choose to slice it instead of shredding, I'm not kidding when I say you can probably use a spoon.) So you can use this as a vehicle for your favorite barbecue sauce, or, like I mentioned earlier, shredded beef tongue is fantastic in tacos, maybe with some diced red onion, cilantro, red peppers—whatever you like.

I’ve heard that another popular way to use tongue is with some kind of sweet & sour sauce—using pineapple and ketchup, or some other tomato-based sauce, probably made with white or apple cider vinegar. I can see it working.

Do you have a good recipe for beef tongue? If so, you know what to do...share it with me in the comments. And if reading this inspires you to try la lengua for the first time, let me know how it comes out!

Remember: Amy Berger, M.S., NTP, is not a physician and Tuit Nutrition, LLC, is not a medical practice. The information contained on this site is not intended to diagnose, treat, cure, or prevent any medical condition.
Posted by Tuit Nutrition at 9:24 AM