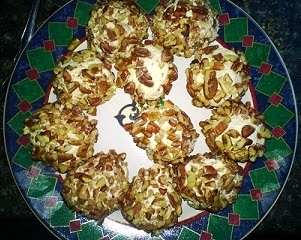 Watching your sugar intake can be a bummer sometimes. I mean, let’s face it; there are plenty of reasons most of us like sweet treats, and number one topping that list is that THEY ARE YUMMY. So what’s a low carb or Primal eater to do when that late night or not-so-late night sweet snack attack hits? You could dive head-first into the Oreos, but since none of you have Oreos in your house (right?), you could try today’s recipe instead. I have nothing against Paleo and Primal desserts that employ things like almond and coconut flour jazzed up with dates, bananas, maple syrup, honey, and the like (well, I do, but not much, and it’s a topic for a different day anyway), but there are low carbers among us who really need to be more careful about the amount of sugar we consume, whether it comes from regular ol’ white table sugar or organic, unsulfured blackstrap molasses delivered on the wings of unicorns. But just because we can’t down “Paleo brownies” or “Paleo banana bread” any more often than we used to inhale the conventional stuff doesn’t mean we’re left out in the cold when it comes to desserts.


In the world of low-carb desserts, cheesecake-inspired creations are some of the easiest and most delicious things to make when you need a little “sump’m sump’m.”

With just a little bit of sweetening, it’s a breeze to transform cream cheese into a canvas for all kinds of flavors. There are a bunch of recipes around the ol’ interwebs that use cream cheese as a base for low-carb “fudge,” and there’s a big world out there of low-carb and sugar-free cheesecakes. Many of them call for copious amounts of Splenda, and it’s up to you to decide whether that’s something you’re comfortable with, but a little tinkering here and there with other ingredients can usually result in some pretty good things as well.

So with that in mind, when I saw this recipe for lemon ginger cheesecake truffles from The Splendid Table (a.k.a. the best radio show you’re probably not listening to…but that’s okay; you can catch up on a bunch of older episodes free via iTunes), I knew I had to find a way to modify it to fit a low-carb lifestyle. With the original recipe calling for an entire cup of confectioner’s sugar and a cup of crushed gingersnaps, there was a lot of room for improvement in terms of sugar content.

So here’s what I did instead: 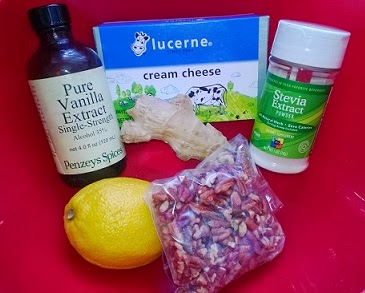 *You can, of course, use whatever sweetening agent you prefer, whether that means Splenda or something natural, like honey or maple syrup. I suggested the stevia just to keep this truly low-carb.
**If you don’t like pecans, you can substitute other nuts. Ones that might work well here are walnuts, hazelnuts, or almonds.

You might notice that compared to the original recipe, my version calls for more lemon juice, ginger, and vanilla. I pretty much do that right off the bat with any recipe that calls for those things. Same goes for cinnamon. I dunno…I seem to find I like the flavors to really punch, and that usually calls for more than the recipe indicates.

Using a stand mixer or spatula, combine the first six ingredients until well blended. Add just a tiny sprinkling of stevia, mix it in, and taste for sweetness. Adjust as necessary. (Go easy at first; stevia’s pretty strong.) Stick this back in the fridge for a while to let the cream cheese re-harden. (Overnight is best if you can swing it.) Once it’s hardened again, use a spoon to scoop some out and roll it between your palms to form a truffle-sized ball. (Size is up to you. Small or large; who am I to judge how big you like your balls? *Looks away sheepishly.*) Work quickly—the cream cheese will soften fast and when it gets soft, it’s really hard to roll, not to mention it’ll leave a mess all over your hands. (Not gonna touch that one with a ten foot pole.) If it starts to get too soft to roll easily, just stick it back in the fridge for a while before resuming.

Leave some plain if you like, and roll the rest in the chopped pecans. When rolling my own balls (hehheh), I found it worked best when the nuts were chopped on the fine side. Nothing close to nut flour, but more than just a rough chop. (If you have grain- or gluten-free gingersnap-type cookies on hand, you can definitely use those, too. Crush them up and roll the truffles in them, just like in the original recipe.)

And that’s it! It’s that simple, and you’ll have magical little balls of lemony, gingery cheesecake goodness! The yield will depend on how large you make the balls, that’s why I didn’t give a number here. (I ended up with 24.) Store them in the fridge.

The flavor on these babies is quite delicious. My only negative comment is that, even right out of the fridge, they’re pretty soft. Their texture is more like the cream cheese they started as than a dense cheesecake. I suspect the cup of confectioner’s sugar in the original recipe gives it a more “solid” mouthfeel. (It also probably gives it a solid blood sugar spike as well, so a soft texture is a small price to pay to avoid that.) This could also well be due to the extra lemon juice and vanilla I used, but methinks it’s more likely the missing cup of sugar.

As you can see, I used regular ol’ cream cheese here. (Not even organic! Call the food police! What can I say…regular was on sale and I was buying a lot of it to experiment with.) If you want to take this to the next level and make it truly “Primal” rather than just low carb, you can start with plain, full-fat yogurt and strain it through cheesecloth or a thin linen dishtowel until you have yogurt cheese, also known as “yo-cheese.” (For best results, allow it to strain overnight.) This is a way to make homemade cream cheese that not only will be a nice probiotic, but will have none of the wacky stabilizers and thickeners that typically come in store-bought cream cheese, even the organic ones.

I’m going to tinker with some other versions of cheesecake truffles in the near future. I’m thinking mocha, chocolate hazelnut, and piña colada. Hello! As Ina often says, “How bad can that be?”

If you give these a try at some point, let me know how they come out!

Remember: Amy Berger, M.S., NTP, is not a physician and Tuit Nutrition, LLC, is not a medical practice. The information contained on this site is not intended to diagnose, treat, cure, or prevent any medical condition.
Posted by Tuit Nutrition at 9:38 AM