If you bought a bunch of soybeans—whether dry roasted and crunchy, frozen and shelled, or whole edamame still in the pods—would you expect to find any tuna fish in the package? No, right? Because that would be just plain crazy. I mean, you’re buying beans. You want beans, not fish. So tell me, then, why there are soybean residues in cans of tuna fish! If I’m buying tuna, I want fish, not beans. They would never think to put fish in a package of beans. So what’s up with putting beans in packages of fish?


Before I bare my fangs and launch into the weekly label offensive, first let me give Wegmans credit for keeping their cans of tuna to the traditional 6 ounces we all know and love. (Recall from this post that over the last couple of years, the formerly typical 6 ounce can of tuna has mostly been replaced by 5 and 4.5 ounce cans.) So kudos to Wegmans for giving us that extra ounce. (Or, rather, keeping it at what used to be the normal size instead of shorting us an ounce.) At least we're getting the full amount for our money. But we’ll see something odd about that money in a little bit.

Let’s take a look at two different varieties of chunk light tuna, both sold under the Wegmans store brand label. The first: 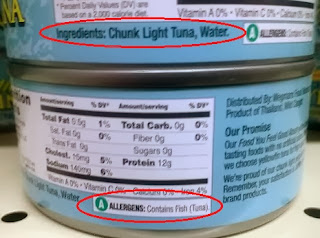 Ingredients: tuna, water. Nice! Finally, a food product I would not only eat, myself, but also recommend to clients without hesitation. It’s almost—almost—enough to restore my faith in mass-market foods. And how much does Wegmans charge us for such simplicity? Let's look:

$1.19 a can, or $3.17 per pound. Not bad! (Back a hundred years ago when I was in the Air Force and shopped at the commissary, most tuna was about 55 cents a can, but I can’t complain. That was the commissary, where things are generally cheaper to begin with, and it was also a lifetime ago, before food prices quintupled seemingly overnight.)

Let's talk about the other thing I circled. “No HVP.” HVP, in case you’ve never noticed it on a label before, is hydrolyzed vegetable protein. It is a pretty snazzy (read: extremely processed and highly messed with) protein extract of vegetables—almost always either wheat or soy. (And recall from this post about vegetable oil that I don’t agree with classifying soybeans as a “vegetable.” Ditto for wheat.) In this case, we know it’s soy. How do we know it’s soy? It’s right here, on the allergen warning:

That was the back of this can:

Now let’s go back and look at the price sticker to see how much this can of tuna costs, with the addition of vegetable broth and salt. Hmm. Only 99 cents. Not too shabby! In fact, that’s a damn good price for a good source of protein. (I’m referring, of course, to the fish, and not the soy.) Works out to $2.64 per pound. So it’s even cheaper than the first one we looked at.

Earlier, I mentioned there was something odd about the money here. So now we have to ask ourselves why Wegmans is asking us to pay more for the tuna that has fewer ingredients. Why are we paying more for a can of tuna and water than we are for a can of tuna, water, salt, and vegetable hydrolyzed soybean broth? I’m all for getting more bang for your buck, so normally I would think it’s a good thing that we get more for less. But not in this case. This would be like going to a department store to buy a new dress (or suit, for the gents out there) and the cashier telling you your item costs $100, but it’s only $90 when packaged together with a pair of dirty socks. But you don’t want the dirty socks! All you want is the nice dress/suit. You shouldn’t have to pay more to get that or pay less and be forced to take it along with something you don’t want. Why can’t they just give you the dress/suit and leave the old, dirty socks out of it? Why can’t they just give us fish and leave the beans out? (Not that I’m comparing soy to dirty socks [though I’m tempted]. I’m just pointing out the ridiculousness of the situation.)

The only reason I can think of for why the tuna with the HVP is cheaper than the one without is that soybeans themselves, as a raw material, are so damn cheap for food processors. (Even cheaper, apparently, than plain water.) As a taxpayer who subsidizes soy agriculture against her will, you’re welcome, Wegmans, you’re welcome.

But the big W isn’t the only brand doing this to us. Most of the more common brands you’ll find have soy in the “canned in water” versions. Starkist, Chicken of the Sea, and Bumble Bee all have soy allergen warnings on their labels. 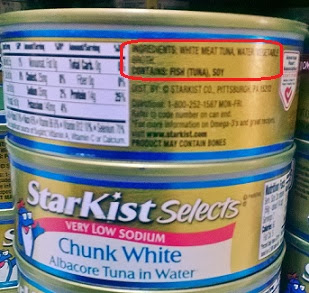 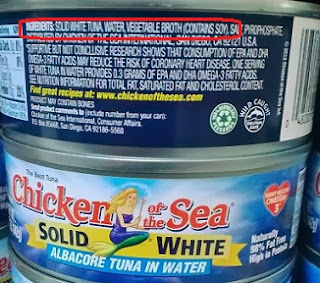 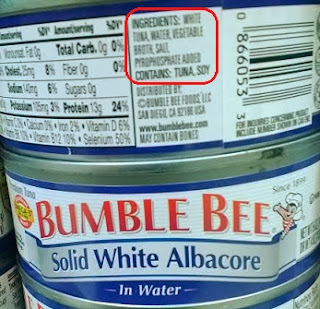 And as for the ones that are canned in oil, most of them use…you knew it was coming…soybean oil. 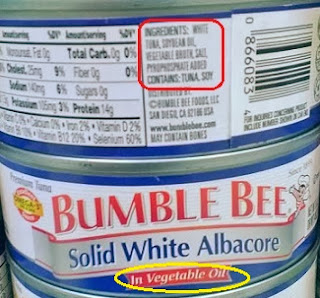 These don’t usually have to have the allergen warning because the allergenicity of foods is typically caused by their protein portion. So the HVP (hydrolyzed vegetable protein, remember) could provoke an allergic response, while the isolated oil is much less likely to. (The example above probably lists the soy warning because of the broth, rather than the oil.)

Even the brands that proudly proclaim OLIVE OIL on the front of the label usually contain soy in some form or another. Like this one: 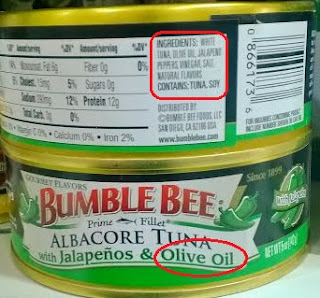 Don’t see the soy? That’s because it’s not listed in the actual ingredients. It’s part of the “natural flavors.” And the only way for us to know this is to notice the line after the ingredients where it says, CONTAINS: TUNA, SOY.

I’ve managed to find another brand besides the “no HVP” Wegmans version that contains no soy. It's the store brand from Giant. (Giant has the same parent company as Stop & Shop, so if S&S is in your area, you can find these there. You’ll notice it’s the same logo.)

The Nature’s Promise line of organic and “all natural” foods from Giant/Stop & Shop also has no soy. Thank goodness. I guess they wouldn’t be able to market tuna under a label called Nature’s Promise if it had soy in it. I can't think of any time in nature when fish flesh would contain soybeans.


And, of course, there are plenty of smaller companies putting out products with nothing crazy in them:

I’ll leave you with one more thought today: With the increasing popularity of vegetarian and vegan diets these days, food processors would never, ever think to put tuna fish in a package of soybeans. So why are omnivores not shown the same respect? Just because I happen to eat tuna and I happen to eat beans (although very rarely) doesn’t mean I always want to eat them together. Plus, soy is one of the most common food allergies. In fact, that’s why they’re required to call attention to it on labels. The same, of course, is true for fish. So let’s say there’s someone out there whose body does just fine on fish but has a raging soy allergy. Unless they really scrutinized some of these labels, they could get into serious physiological trouble. And you could hardly blame them. They shouldn’t have to read labels looking for hidden soy in their canned fish, BECAUSE CANNED FISH SHOULDN’T HAVE ANY FREAKING SOY IN IT ANYWAY.

P.S. For more on just what the heck hydrolyzed vegetable protein is, check out this awesome post by J. Stanton over at gnolls.org. (It's worth checking out. Just like other forms of soy, gluten, and vegetable oil, it's in darn near everything.)
P.P.S. Okay, honestly, this whole vegetable broth in tuna thing isn't that big a deal. After all, most of us are draining off all that liquid before we eat the tuna anyway. So the amount of HVP we would end up eating is miniscule. Even so, I stand by my argument: there's no reason to put soy in tuna.

Remember: Amy Berger, M.S., NTP, is not a physician and Tuit Nutrition, LLC, is not a medical practice. The information contained on this site is not intended to diagnose, treat, cure, or prevent any medical condition.
Posted by Tuit Nutrition at 11:36 AM