When you get a look at the pictures in this post, you might think they’re better suited for my Label Madness Monday series. But it’s been a while since I’ve served up anything new in the Mardi Gras/Fat Tuesday category, and according to the pageview stats, the posts about fats are pretty popular. So in the spirit of giving you more of what you seem to like reading about (plus more of what I like writing about), I present you with a little thought experiment regarding fats and oils.
Here’s the challenge: Name the five fattiest foods you can think of. Really, take the time to think of them. Very fatty foods—at least five of them.

I’m not surprised. See, corn and soybeans are not especially fatty, are they? If someone were to ask me to name the fattiest foods I could think of, I’d probably include lard, beef tallow, and ghee. But that’s cheating. Those are pure fats. No protein and no carbohydrate. So let’s say I had to name five whole foods that are high in fat. I’d go with bacon, cheese, bone marrow, chitterlings, and macadamia nuts.

Of course corn and soy aren’t high in fat. Corn is a grain and soy is a legume, two plant categories not generally regarded for their high fat content, correct? (Yes.) And the one thing all the warring nutritional factions can agree on—whether they’re low-carb, Paleo, vegan, vegetarian, or based on standard government nutrition advice—is that we should eat fewer processed foods, correct? (Also yes.) So if corn and soy are not high in fat, please tell me, then, how much processing you think it takes to extract gallons of oil from them:

Second point of the day: I have a bone to pick with the coiner of the phrase “vegetable oil.” If we classify all edible things as either animals or vegetables, then yes, I suppose soybeans can be considered a “vegetable.” I think, however, that it would be better, taxonomically speaking, to think of the division more like animals or plants. This is just a personal sticking point, though. When I think of “vegetables,” I think first of green things, like spinach, broccoli, asparagus, lettuce, and Brussels sprouts. A split second after that, I think of all the other vegetables in colors that make vegetables pretty to look at (not to mention good for us because of the various phytonutrients that help create those pigments) – eggplant, red bell peppers, yellow onions, carrots, beets, tomatoes, etc. I don’t generally think of soybeans, or any other bean, for that matter. (I also don’t immediately think of peanuts or sesame seeds when I hear the word “vegetable,” although oils extracted from these plants are also, technically, vegetable oils. So while I can’t say I consider peanuts and sesame seeds “vegetables,” extracting oil from these fat-rich plants makes a heck of a lot more sense to me than trying to squeeze it out of soybeans or corn, for cryin’ out loud.)

So back to that gallon of “vegetable” oil. Let’s take a look at the label and see what kind of “vegetables” it comes from. 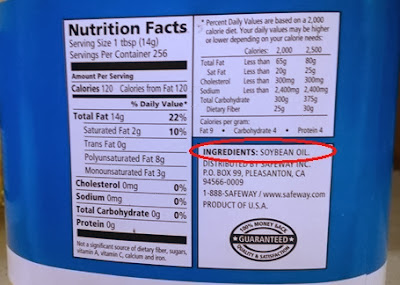 Soybeans! The undisputed kings of the vegetable category! (If you happen to live on a planet other than Earth, that is.)

Now that you know that “vegetable oil” is industry speak for the fat they somehow wrench out of soybeans, start reading labels. You’ll find it in everything: salad dressing, most margarines and other “vegetable oil spreads,” non-dairy creamers, bread, peanut butter (most of the commercial brands that aren’t just peanuts or peanuts and salt), crackers, microwave “entrees,” cookies, cakes, biscuits, and just about everything else that comes in a box, bag, bottle, or tub. Mayonnaise is a classic example—even the ones that say they’re made with olive oil are still predominantly soybean oil. They add a tiny bit of olive oil to the formula so they can say it’s made with olive oil and sort of sweep under the rug the fact that it’s mostly soy.
Back to the pictures. How about this one:

Look at Mazola, proudly announcing that its corn oil is cholesterol free. No kidding, geniuses. (If this weren’t a PG-rated blog, I’d use the other phrase. You know, the one that ends with Sherlock.) I should certainly hope this corn oil is cholesterol free, considering cholesterol is only manufactured in animal tissue. There are zero plant sources of cholesterol on the entire planet. (Plants have phytosterols instead.) This is like showing a picture of a woman and labeling her as having no Y chromosome. By definition, women have no Y chromosomes, and by definition, oils extracted from plants like corn and soy contain no cholesterol. (It’s also like the description on packages of poultry that assure you no artificial growth hormones were administered to the animals when growth hormone use is illegal in poultry in the U.S. Antibiotics in the feed? Yes. Growth hormones, no. The wording is only there to make us feel better about our purchases…and maybe reassure us that the producers are, in fact, following the law.) So cholesterol free corn oil? Why yes, it is cholesterol free. Whoop-dee-do. Advertising that fact of nature is just plain silly. (Silly semantics; great marketing.)

Okay, so we’re agreed that there’s a lot of wacky marketing in the world of edible oils. (And, to be honest, I have a hard time even using that phrase—edible oils. Especially when that category includes cottonseed oil. As I’m fond of saying, “Cotton is for wearing, not for eating.”) So the marketing is bad enough. But what about the production of this stuff? How do they get gallons upon gallons of clear, odorless oil from things like corn and soybeans anyway? Hang onto your hats, kids. It ain’t pretty.

If you are so inclined, check out this video on the manufacturing of canola oil. A few words of caution, though: First, you’ve got to ignore almost everything the narrator says for the first several seconds. There is no such thing as a “canola plant.” The word “canola” comes from Canadian oil, low acid. The plant this oil comes from is rapeseed, and in its natural form, it contains high amounts of a rather toxic substance called erucic acid. Canadian scientists a while back figured out a nifty way to breed a variety of rapeseed that is low in erucic acid and that seems to have a favorable fatty acid profile, as far as food oils go: high in monounsaturated fat with a pretty good dose of omega-3 alpha-linolenic acid. (The original name for this oil was LEAR oil, short for “low erucic acid rapeseed,” but I guess that was a marketing bust because they changed it to Canola, possibly to pay homage to those Canadian scientists, but more likely because LEAR oil sounds like something you might squirt onto the inner workings of an aircraft engine, and let’s face it, nobody wants WD40 in their salad dressing.)

But that’s just for starters. The second thing—and if you’ve been following my blog for any length of time, you probably already know this, but in case you’re new here—is that you should ignore what the narrator says at the beginning about canola oil being a healthy choice because of its low saturated fat content. We’re all clear on the concept that saturated fat doesn’t cause heart disease, right? All saturated fat does is make things delicious, so the biggest drawback I see to that is that it just makes it darn near impossible to set your utensils down and walk away from the table.)

Third: Make sure you get a good look at the “wax byproduct” they use for making vegetable shortening (around 3:00). Take a gander, and then think twice before you buy anything with shortening on the label.

This whole video should pretty much terrify you. Pay attention to the extraction, heating, bleaching, filtering, solvent bath, etc. And then remember that you are eating this stuff.

Here’s one more video, this one about making cold-pressed sunflower oil. There’s a lot less in the way of bleaching, washing, and deodorizing, but it’s still a little unnerving. Check out how dark the sunflower oil is. (Probably because they crush the seeds while still in the shells, which are black.) Not exactly what you’re used to seeing in bottles at the store, huh? Good thing they do filter it. Also: be sure to listen around 4:00 – the narrator mentions that most vegetable oils are fragile. They do not hold up well when exposed to heat, light, or air. These oils should be kept in DARK containers, preferably glass or metal. But what do we typically see in stores? Clear plastic bottles, so we can see the color of the oil and admire it. This is especially true of olive oil, ’cuz most of us want a nice, green oil but every cook (or Italian) worth his/her mettle knows olive oil is best purchased in one of those scary metal containers and doled out into a dark glass bottle little by little, so as to keep air and light exposure to a minimum. And flax oil? Don’t even think about putting it in your frying pan. It’s great in smoothies or protein shakes and homemade salad dressings—cold preparations—but is not for cooking.

That’s all for now. A little more info about oils and food processing to help us make better choices at the supermarket, restaurant, and kitchen table.

I’ll leave you with this guide to oils from Mark Sisson. He’s broken down the fatty acid profiles of the most commonly used edible oils, complete with his characteristic wit and tongue-in-cheek approach. Remember: the higher the percentage of PUFAs (polyunsaturated fatty acids) in an oil, the less safe it is for very high-heat cooking. (So think of all the restaurant deep fryers out there that are filled with various permutations of corn, soy, canola, and possibly safflower oils. Like I tell my clients: fried food isn’t bad for us because it’s fried; the problem is the type of oil it’s fried in.)

Remember: Amy Berger, M.S., NTP, is not a physician and Tuit Nutrition, LLC, is not a medical practice. The information contained on this site is not intended to diagnose, treat, cure, or prevent any medical condition.
Posted by Tuit Nutrition at 6:34 AM