Today’s game of label hide-and-seek involves one of the paragons of so-called “healthy diets.” It’s “the staff of life,” the base of the now defunct food pyramid, and the go-to breakfast item for anyone who thinks they’re “eating healthy.” Whole wheat bread! Have you seen these things at the store? Perusing the shelves, you’d think you couldn’t possibly ever get enough grain. Whole grain, multi-grain, 7-grain, 9-grain, 12-grain. The more grain, the better! (This might be true if you’re a beef feedlot owner and need to get your cattle to market weight as quickly as possible. How do you fatten up a cow? Lots and lots of grain. Hey, whaddya know? It’s kinda the same with humans! But I digress. And we’re still in the first paragraph. This does not bode well for the rest of this post, hehheh.) 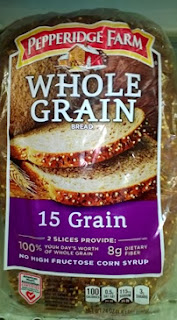 I stumbled across this gem the other day and couldn’t resist taking a look. I mean, 15 grains? That’s a lotta grain! I wanted to read the ingredients just to see if there were really 15 different grains in this bread. The first bad news about this product is that it’s false advertising. 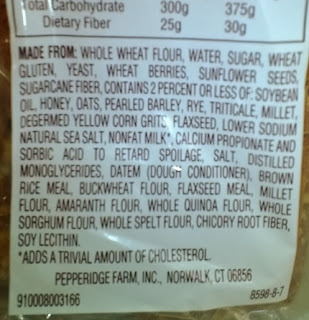 At my count, there are only 13 different types of grain, and that’s if you count buckwheat and quinoa as grains. (They’re not. Botanically speaking, they’re seeds. But I’ll give Pepperidge Farm a pass on this, because it’s just not that big a deal.) Maybe they’re also counting the flax seeds and sunflower seeds as grains, which they’re also not. (No free pass here. These even have the word seed in them!) Wheat, oats, barley, rye, triticale, millet, corn, brown rice, buckwheat, amaranth, quinoa, sorghum, and spelt. YOWZA! That, my friends, is an astounding variety of grains to shove into one little loaf of bread. Kudos, Pepperidge Farm, kudos. (As to where their count of 15 comes from, I can only guess they are counting the flax and sunflower seeds, or maybe the double-mentioning of wheat and millet. I wouldn’t count wheat berries as a separate grain from wheat flour, or millet flour as separate from whole-grain millet, but that’s probably why I’m not the head of this brand’s marketing department.)

Let’s see what else is in here. Sugar. No big deal. I’ll actually let that one go this time, since most bread recipes contain at least a little sugar to feed the yeast. Moving on: Soybean oil. (Of course. Can’t have anything in a box or bag these days that doesn’t have some form of soy in it. *Sigh.*) Extra wheat gluten. Calcium propionate and sorbic acid, “to retard spoilage.” And DATEM, a dough conditioner. [Insert wistful smile.] I remember back when my grandma used to bake bread. She always had that big jar of DATEM in the cupboard and the calcium propionate on the shelf, just waiting to be added to her dough so it could sit around for weeks without spoiling. Aaaah, yes, the good old days.

Most of you reading my blog (all three of you) likely found me from a link on a low-carb or Paleo site. So you probably don’t eat bread at all, or if you do, you’re certainly not eating this stuff. (Maybe a nice, fresh, real sourdough from a bakery you trust not to put anything wacky in it. Or a dark, dense, nutty, “peasant”-type loaf from the dude at the farmer’s market because it looks amazing, and dammit, you don’t have any gluten sensitivity that you’re aware of and you just want a slice of bread! So sue me! Um…I mean, not me. Okay, fine. It was me. There. I said it. I eat bread sometimes. It doesn’t tear up my insides or cause any allergic/skin/mood issues I can identify, so I do a little bread bender every 5 months or so, buying a fresh baguette or olive focaccia and proceeding to consume the entire thing by myself in 2-3 days, and then not buying bread again for another few months. Go ahead, kick me out of the club. ;-)

As long as we’re on the subject, what’s up with charging $6 for a loaf of “peasant” bread, anyway? I guess it’s the same logic that inspires fashion designers to charge upwards of $300 for “hobo” bags. Um, if I remember history class correctly, hobos were poor. They were happy if they could afford a mouthful of chew and a bowl of soup now and then. They most definitely weren’t walking around train yards with $300 handbags. But I digress…again.)

Let’s get back to the label. Now that we’ve gone over the ingredients, let’s look at the macronutrient breakdown on this bad boy. (Macronutrient is the fancy term for the big nutrients we eat: fat, protein, and carbohydrate.) So how does this stack up? Let’s see. 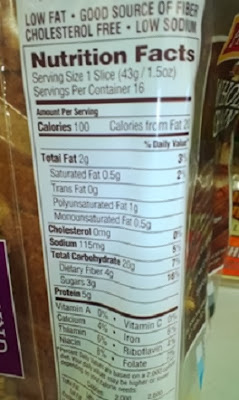 Per slice, we’re looking at: 100 calories, 80 of which come from carbohydrate. (20 grams of carbs times 4 calories per gram.) We can subtract 4 grams (and 16 calories) because of the fiber. (This is called “net carbs” – the carbohydrate count of a food minus the fiber, and sometimes the sugar alcohols, depending on your philosophy.) So let’s call it 64 calories, of which come from refined carbohydrate. (I don’t care how “whole” the grain is. If it’s been milled into flour, it’s refined. Compare a slice of whole grain bread to a handful of wheat berries—the stuff you find in the bulk bins at hippie-type co-ops (and Whole Foods). Now tell me the bread ain’t refined.

So over half the calories are from carbohydrate, and there are only 2 grams of fat per slice. A mere 18 calories from fat (2 grams x 9 calories per gram for fat) to buffer 64 from carbohydrate. And I would imagine few people bother with just one slice of bread. Whether it’s a sandwich or toast in the morning, it’s usually two slices, right? So we’re talking 128 calories of carbohydrate and just 36 from fat. And if you’re “eating healthy,” maybe you spread a little jam or preserves on the bread, ‘cuz hey, they’re made with fruit and they’re totally fat free! And let’s say it’s breakfast, so you add in a glass of orange juice and maybe a small bowl of cereal. What a great way to start the day, huh? Lots of low-fat and fat-free foods, “healthy whole grains,” a teeny, tiny bit of protein in the bread (all coming from gluten, which offers its own complete set of issues that we won’t delve into today), and almost no lick of fat. That is a fantastic way to start the day! Who wouldn’t want to go careening on the blood sugar rollercoaster first thing in the morning? Wheee! Like my disclaimer says, I’m not a doctor, but I sure hope you’ve got good medical insurance, because you’ll need it when your pancreas calls it quits after 30 years of this kind of abuse. (Insider trading tip: buy stock in Metformin. Now.)

What else do we see on this package? 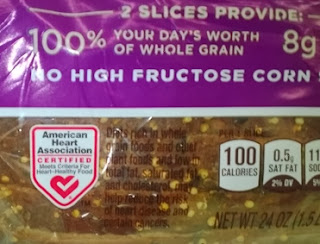 Ah, yes, the American Heart Association’s seal of approval. Sweet! I guess that means this is a “heart healthy” food! I wonder which part of it, exactly, they consider healthy. Is it the soy oil? The extra added gluten? The calcium propionate or DATEM? Eek! Thank goodness this bread doesn’t contain anything crazy that healthy, robust humans have been consuming safely for thousands of years, like eggs or butter, ‘cuz the soybean oil and wacky preservatives are totally fine, but cholesterol’ll kill ya! (No, it won't.)

Maybe the AHA gave its seal of approval because Pepperidge Farm paid it an enormous sum of money of some other reason. Maybe it’s because this bread is loaded with nutrients. I’ve seen foods more devoid of vitamins and minerals, but that doesn’t make this one a nutritional home run. One slice has 6% of the daily value for thiamin, 8% niacin, 6% iron, 2% folate. Not too shabby.

Let’s say a typical serving is two slices of this bread. That would be 200 calories. Let’s see how it stacks up against a calorically equivalent amount of something the AHA would never, ever put its seal of approval on because of all the … *gasp!* … saturated fat, and … *gasp!* …  cholesterol in it: beef liver. The treasured organ meat of yesteryear. For just 191 calories (giving the bread a full 9-calorie advantage!), the liver provides:  634% of our vitamin A, 201% of the riboflavin (vitamin B2), 1176% of the B12, 71% of the pantothenic acid (B5), 63% of the folate, 51% of the B6, 88% of the niacin (B3), 36% of the iron, 50% of the phosphorus, 35% of the zinc, 714% of the copper, and 52% of the selenium (daily values based on a 2000 calorie diet). HOLY MOLY! The beef liver leaves the bread in the dust. Actually, first, it beats the snot out of it, then it steals its lunch money, and then it leaves it in the dust. And I guess the AHA is ignoring the fact that a 3oz serving of liver delivers that wham-bam nutritional knockout with a glycemic load of just 4—meaning it has almost no effect on blood sugar, while the zillion-grain bread is sure to spike the ol’ blood glucose a bit with all that carbohydrate and so little fat to buffer it. (Note: if you click on the link to see the liver nutritional info, you’ll have to toggle the “serving size” menu to 100g in order to match up the calories.)

One more thing before class ends for the day. Let’s look at the claim on the front of the package: “Diets rich in whole grain foods and other plant foods and low in total fat, saturated fat, and cholesterol, may help reduce the risk of heart disease and certain cancers.” MAY. MAY reduce the risk. So you know what that means, right? It means they might NOT. They MAY reduce your risk, but they might also do DIDDLY SQUAT.

And now, just to spite the AHA, I’m about to go enjoy a slice of the crustless quiche I made this morning, with lots of eggs, cheese, heavy cream, and NO WHOLE GRAINS. (No grains of any kind, in fact.) YUM. 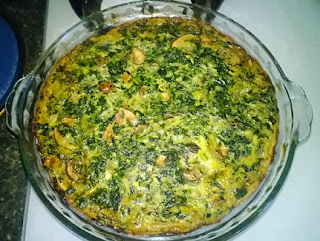 P.S. I lied. One more thing before we adjourn. Go back to the picture with the AHA seal on it. What else is this package telling us? 2 slices of this bread provide “100% of your day’s worth of whole grain.” Hm. That’s funny, because in all the anatomy and physiology textbooks I’ve read, and all the biochemistry classes I’ve taken, I don’t remember ever learning about human beings requiring whole grains. In fact, I’m pretty sure I learned just the opposite. There are essential amino acids, and essential fatty acids, but THERE ARE NO ESSENTIAL CARBOHYDRATES. Did I say that loud enough? Let me repeat it, just in case: There are no essential carbohydrates. That’s not to say that the human body doesn’t require glucose to run some of its operations, or that everyone across the board should adopt a low-carbohydrate diet. All I’m saying is, it’s hard to believe the U.S. government is telling us we have some kind of daily requirement for the one macronutrient the human body doesn’t need to ingest at all. (We can make glucose from lots of other things, kind of a biochemical Jenga or Rubik’s Cube, if you will, moving and shifting things here and there until we get what we need.) Then again, it’s not that big a mystery. If the USDA tells us all of a sudden that we don’t need all those whole grains, what on Earth will we do with the massive, massive glut of wheat and corn (plus soy, but that’s not a grain) we produce thanks to our very own tax dollars (via big time subsidies)? They tell us we need it just so they can get rid of all of it! [/rantover]

Remember: Amy Berger, M.S., NTP, is not a physician and Tuit Nutrition, LLC, is not a medical practice. The information contained on this site is not intended to diagnose, treat, cure, or prevent any medical condition.
Posted by Tuit Nutrition at 2:52 PM