Whole grain! High fiber! Good source of vitamins & minerals! May help lower cholesterol (as part of an overall healthy diet & lifestyle that includes tons of vegetables and fruits and even tons more exercise)! May help your firstborn get into Harvard (as part of an overall nose-to-the-grindstone lifestyle that includes playing the oboe, being captain of the debate team, acing the S.A.T., and discovering the cure for cancer for the science fair junior year)! May give you superpowers! May help you become the Next Iron Chef! 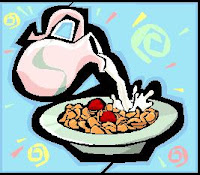 Cereal boxes make an awful lot of interesting claims, don’t they? Whether what’s inside are flakes, puffs, balls, marshmallows, freeze-dried strawberries, or organic, whole-grains that have been pampered, protected, and have never seen a day of work in their lives, there’s far more lurking in those boxes than you might realize.

What’s so ridiculous surprising about cereal? Read on.

In an effort to keep with my resolution to blog more (really, I should call it a promise, because that makes it seem like I’m doing something nice for myself and takes the pressure off), I’ll have to keep this one simple. The truth is, I could write ten posts about “whole grains” and how they’re not as holy (*wink, wink*) as we think they are—and that probably wouldn’t even scratch the surface. I could write another ten about sugar, the genetically modified corn, soy, and wheat some cereals contain, and maybe another ten about artificial colors and flavors. So instead of getting wrapped up in the minutia (not to mention entangled in the environmental and political debates some of these issues stir up), I’ll stick with the basics.

Y’know that phrase “missing the forest for the trees?” Well, it’s pretty dead-on when it comes to breakfast cereal. I’m talking about all cereal: organic, whole grain, frosted, shredded, sugar-coated, “all natural,” generic supermarket brands, fancy brands that cost three times more, and the ones that are so loaded with fiber that they include a roll of toilet paper for you right there in the box. I’m not saying there isn’t a continuum of quality; obviously, cereals that are just grain with no artificial colors or flavors, and no added sugar are a better choice than the ones that come with weird n’wacky things like yogurt covered raisins, “chocolatey coated pieces,” hydrogenated vegetable oils, and fractionated palm kernel oil. But even the plain cereals—the ones that seem wholesome—aren’t the best way to start your day.

I’m not here to get into a food fight. And I’m not here to expose every single thing I think is completely and utterly insane not so great about cereal. Like I’ve said before, I’m a nutritionist, not a saint. I used to live on cereal. For most of my life, it wasn’t a food so much as a way of life. Every morning…the tinny sound of the flakes or puffs cascading into a bowl was practically the soundtrack to my childhood. And my teenage years. And definitely my college years. (Hey, I was living away from home and, thanks to the dining hall gods, I was free to have Lucky Charms or Cap’n Crunch for dinner. And you can darn well bet I did! With chocolate milk! [It’s nothing less than a miracle that I still have any pancreatic function left whatsoever.]) My favorite snack was cereal eaten right out of the bag, no bowl, no milk, no spoon. Any time of day, any time of year. I probably put some General Mills executives’ kids through college. (You’re welcome.)

I’ve even been known to have a very rare, teeny, tiny handful of cereal even now that my dietary practices are like night and day from back then. So yeah, I’m not saying cereal is the absolute worst thing you can put in your mouth (although in some cases, it is). My goal here is only to pull the wool from over our eyes and just open the conversation. To get us thinking about what we’re putting in our bowls and in our bodies.

There’ll be more posts to come on this topic and I’ll get into the weeds a little. We’ll look specifically at some of the cereals that are deliberately marketed as “healthy” (should be healthful, but hey, this is a site about nutrition, not grammar, so I’ll concede to the common American English usage), and we’ll see that most of the claims made for these ersatz foods are criminally false advertising so off the mark it’s not even funny. At best, these are ingeniously marketed junkfoods. At worst, they’re actively worsening health. We could also take a look at my gold medal winners of truly ridiculous cereal creations that “everyone knows” are terrible for us, but that would take our eyes off the real point of interest, as I see it: cereals that we think are good for us, but aren’t.

So for now, let’s just look at two. These aren’t the most stunning examples of the heart-healthy-whole-grain-high-fiber cereals you’ll find at the store, but they tell enough of the story to get us started. (Chalk it up to convenience: these happened to be two I had easy access to photograph, thanks to housemates who still consume these products. I say that with no condescension whatsoever, because the ice cream with whipped cream I had two nights ago was delicious, thankyouverymuch. Holier than thou I am not.)

First up: a whole grain, high fiber, low fat cereal from one of the stores natural foodies swear by. (I love this place, myself, and I have no desire to bash them. [Not in this post, anyway, hehheh.] I’m simply pointing out what’s plainly printed on the box for all to see.) I won’t name the store, but let’s just say if it were a former U.S. president, it might share initials with Thomas Jefferson, and this cereal is marketed under their in-house brand. 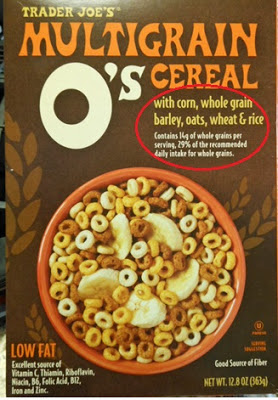 As you can see—hard to miss, in fact, since it’s printed in big letters on the front of the box—this is made from whole grain barley (and other grains), and contains 29% of the daily recommended intake for whole grains. It’s also low in fat, and an “excellent source” of a few vitamins and minerals. And then, of course—of course—the fiber. 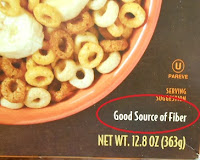 (Why is it that we’ve come to think only whole grain cereals and bran muffins have fiber? Jeez, how did human beings ever take a poop before modern food manufacturing? I don’t know, but cows and sheep seem to create an awful lot of manure when they eat nothing but grass, so presumably there’s some degree of fiber in…I dunno…vegetation? Broccoli? Greens? Eggplant? Yes?)

Okay, fine. Let’s start with the obvious:  most of the vitamins and minerals it’s such an “excellent source” of are only in there because they’re added in. Whole grains are not actually such good sources of vits & mins. The B12 is especially telling since, except for some types of algae and possibly seaweed that produce it, B12 is found exclusively in animal foods. So you know it’s a synthetic vitamin that was added. Grains are also not especially good sources of vitamin C. In fact, they have pretty much none. Not even the anointed whole grains. They just ain’t got none. Now, I’m not saying this makes this cereal a bad choice; I’m simply pointing out that this cereal isn’t high in vits & mins because the grains it’s made from are high in them. It’s high because synthetics have been added during manufacturing. (This is what they mean when they say “fortified with…” It means the original starting materials were piss-poor not great sources, so they had to put fake ones in to make the nutrient profile look better. Kinda like fake boobs, high-heels, or even lipstick: what you see is not what you get.) 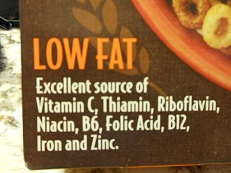 The cereal is low in fat. So what? It’s nothing but carbohydrate, which is readily converted to saturated fat inside our bodies when we eat more of it than we burn. (Palmitic acid, for all you biochem geeks out there.) If you had a five-pound bag of sugar and slapped a giant label on it that said “FAT FREE,” would that convince you the sugar was good for you? Low fat and fat free do not equal healthful or nutritious. Read that last line again. (And again. Until you have it memorized.)

Okay, so it’s low in fat, high in whole grains, and high in some vitamins and minerals. Let’s see what else it’s high in:

Mmmm…flour, sugar, and oil. Let’s take a good look at the ingredients here: 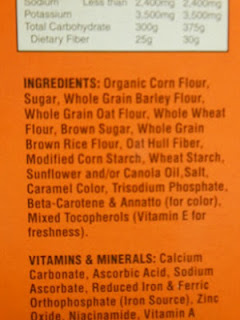 Please, please tell me you do not think this is the best way to start your day. Blood sugar rollercoaster, anyone?  Maybe you’ll pour yourself a bowl of this and top it with skim milk. I’d sooner recommend you eat a piece of cake—at least that might have an egg or two in it, and probably more fat! The only thing better (and by "better," I mean "worse") than a bowl of this cereal first thing in the morning (when your insulin levels are low and you’re therefore in the best biochemical position to set your body running on fat rather than carbohydrate all day) would be pairing it with a nice tall glass of orange juice or a fat-free muffin. More sugar, no fat, no protein. (Natural sugar is still sugar, capice?)

And as long as we’re here, one more for good measure: 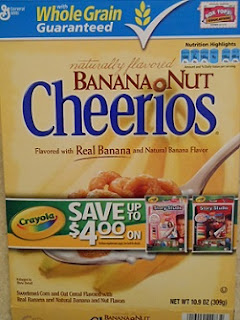 Notice this one doesn’t have the same claim about lowering cholesterol levels as the “original” or classic version. Probably because—despite their many flaws—the folks at the American Heart Association could not endorse a cereal that had three different kinds of sugar among the first five ingredients and still take themselves seriously. 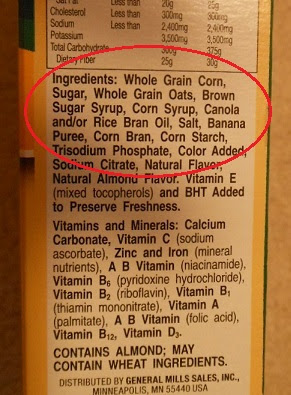 Do you see it? The first five ingredients include sugar, brown sugar syrup, and corn syrup. Sounds like a great thing to feed a child first thing in the morning! Let’s buy two boxes! Why not?!  It has real banana puree and “natural banana flavor,” whatever that means. (I guess the actual, real banana flavor wasn’t, I dunno, banana-y enough?) And, oh, look, canola oil comes in at number 6. (And we know how I feel about canola.)

That’s it for now. Like I said, I’m not completely bashing cereal. (Okay, maybe I am.) I just want us to start being more aware of what we’re eating. We can only make good choices if we know what those choices are. Read labels, folks. You work hard to earn your money, and, forgive me for presuming, but I imagine your supply of it is not unlimited, and you kind of have to keep an eye on what you do with it. Spend it wisely. Know what you’re buying. Your shopping cart is a sacred space. Don’t fill it with junk. (Exception:  ice cream. With whipped cream.)  ;-)

How about you? Have you been reading labels? Found anything surprising? Let me know in the comments.

Posted by Tuit Nutrition at 7:26 PM