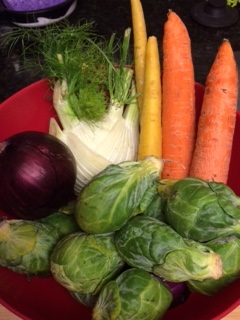 Time for another installment of Low Carb Cooking Class!

Today’s lesson is for people who claim they don’t like vegetables.

Let’s get one thing out of the way: despite what has been pounded into your head for pretty much your entire life, vegetables are not actually required in the human diet. They’re just not. I’m sure that is quite shocking to some of you. (What about fiber?! What about feeding your gut bacteria? What about the phytochemicals?! Don’t we need quercetin, resveratrol, curcumin, sulphorophane, and other goodies we get from plants? Well, sure, they might be helpful in certain circumstances, but required? Nope.) There are no essential nutrients—none—that you get from plant foods that you can’t get from animal products. You can, indeed, live on a “zero carb” or animal-only diet. (Kind of like the opposite of veganism.) You don't even need the fiber. In fact, lots of people with IBS and other issues related to impaired digestion of plant material seem to do better on diets low in indigestible fiber. I’m not saying I recommend a zero-carb diet; only that it is, technically, possible. (And not only is it possible, but many people are absolutely thriving on this way of eating, when just about everything else—including regular ol’ low carb and ketogenic diets—did not give them the results they were looking for.) According to the Food and Nutrition Board of the Institute of Medicine of the U.S. National Academy of Sciences, “The lower limit of dietary carbohydrate compatible with life apparently is zero, provided that adequate amounts of protein and fat are consumed.” And since fiber is a carbohydrate, zero dietary carbohydrate means zero dietary fiber. But again, I’m not saying a zero carb diet is recommended or optimal; I’m simply noting that you don’t need to force down copious amounts of indigestible plant material if you really, really don't like it.

But for those of you out there who do want to include vegetables in your diet, but maybe aren’t the biggest fan of them, why is this? My guess would be that you grew up in a home where your only exposure to vegetables was via frozen or canned vegetables heated up in a microwave, or fresh vegetables boiled beyond all recognition, with flavor and texture both rendered completely unappetizing. If you don’t like vegetables because you’re accustomed to being served veg that are mushy, soggy, bland, and just plain lifeless, that ends now!


Now that you’re low carbing, you can enjoy your vegetables drizzled with olive oil, topped with melted cheese, dipped in ranch dressing, used as a pasta substitute, or even used as a pizza crust. (Another good recipe for this here.) Vegetables can be boiled, steamed, grilled, stir-fried, deep fried, or…

Yes! I have converted more than one veggie hater into a veggie lover by serving them roasted vegetables. I have a good friend who had never liked brussels sprouts until he tried them roasted. This technique is dynamite. It transforms pretty much any and all vegetables into bits of extreme deliciousness.

Here’s how it works:

Preheat your oven to 425°F/220°C. Chop the vegetables into similar-sized pieces, toss with olive or avocado oil (melted bacon fat or ghee might be even tastier), and season liberally with salt and freshly ground pepper. (To save washing an extra bowl, you can lay the vegetables out on a baking sheet and do the seasoning right there. For even faster cleanup, line the baking sheet with aluminum foil – your cleanup will consist of “remove foil from pan, roll up in ball, throw away.” You won’t even have to wash the baking tray. Score! [Am I concerned about aluminum foil touching my food? No. I wrote a book about Alzheimer’s disease, and I don’t think aluminum has anything to do with it.]) Spread the vegetables out in a single layer. A little overlap here and there is fine, but if you leave them in a big pile, they’ll steam, rather than roast, so give them room to do their thing.

Roast for anywhere from 10-25 minutes, depending on how well done you like your veg and how large the pieces are. What happens is, the outsides start to get brown and, in some cases, crispy, while the insides gets soft and tender.

The list of vegetables that become amazingly delicious when cooked this way includes:  brussels sprouts, broccoli, cauliflower, fennel, radishes, asparagus, zucchini, yellow squash, eggplant, green beans, carrots, beets, bell peppers, and onions—red, yellow, white—all of ‘em!  Roasting vegetables this way brings out their natural sweetness. What, you didn’t know broccoli had some sweetness to it? Or fennel? They do.

Roasted vegetables are pretty much the easiest side dish ever, except for eating vegetables raw. They require nothing more than salt, pepper, oil, and a baking tray.

Here’s a list of things you can serve this alongside:

No, seriously. This is the king of all side dishes. It works with meat loaf, steak, roast chicken, canned tuna, salmon, or sardines, pork chops, grilled or baked fish, and even cold cuts or hard boiled eggs if you’re really in a pinch for animal protein. There’s basically nothing you can’t serve these with. They’re great hot, cold, or room temperature, so they’re perfect for making a large batch to ensure you have a bunch of leftovers. To use the leftovers, eat them as-is, or use them in a frittata or chop them into smaller pieces to use in egg muffins.

Pro tip: toss the vegetables with balsamic vinegar after roasting, just before serving. (Even better if you reduce the vinegar into a thicker syrup consistency. Higher in carbs? Yes. Suitable for everyone? Maybe not. But still, we’re talking vinegar, not Twinkies, and with a concentrated balsamic vinegar reduction, a little goes a long way. And we’re concentrating the natural sweetness of the vinegar, but not adding any sugar or corn syrup to it, like you might see in bottled vinegar glazes.)

Another pro tip: instead of salt & pepper, toss with a spice blend you like. (McCormick’s Montreal Chicken works really well with this stuff, but there are plenty of others that would do just fine.)

Check out how one my very favorite low carb-friendly doctors, Ted Naiman, MD, puts this into practice. (The whole page is worth reading, but this roasting technique, specifically, is about 2/3 of the way down.) Cranking the oven up to 500° might be a little high, but hey, whatever works! That would probably just accomplish the task that much faster. In fact, you can go the other way and use a lower temperature – like 300°F or so – and it still works, but it takes longer. (Some people say the result is better, but that probably depends on whether you like the crispy & browned aspect, or prefer your veg cooked until soft and sweet but without the charring.)
Here are some pictures of this in action. Everything looks very plain, but looks can be deceiving. I assure you, with the right seasoning -- really, just salt & pepper -- roasted vegetables are wickedly delicious. As always, please excuse my lack of photography skills.

I’ll leave you with some mouthwatering recipes for roasted vegetables from the cooking geeks experts at Serious Eats. I get hungry just reading the titles. Here are some other great ones. Except for the first one, which is from my beloved Ina Garten, a.k.a. the Barefoot Contessa, these are all from Michelle Tam at Nom Nom Paleo (whose food photography is outstanding):

P.S. If you do Brussels sprouts this way, you will see that the individual leaves that fall off get crispy and charred and they basically taste like popcorn. Yes, I eat charred food sometimes. Am I worried about consuming the AGEs? No. (Check out Nom Nom Paleo's recipe for Brussels sprouts chips.)

Disclaimer: Amy Berger, MS, CNS, NTP, is not a physician and Tuit Nutrition, LLC, is not a medical practice. The information contained on this site is not intended to diagnose, treat, cure, or prevent any medical condition and is not to be used as a substitute for the care and guidance of a physician. Links in this post and all others may direct you to amazon.com, where I will receive a small amount of the purchase price of any items you buy through my affiliate links.
Posted by Tuit Nutrition at 12:11 PM