As promised last week, today’s study in label chicanery is about ice cream…or, rather, frozen dairy dessert. See, they’re not the same thing, and unless you know what to look for on the label, you could be spending your hard-earned money on wacky additives instead of what’s supposed to be in ice cream: cream.

I’m not saying it’s completely impossible to cut corners in food production or that you absolutely cannot purchase good food at a reasonable price. But there is a kernel of truth to the saying “you get what you pay for,” especially when it comes to food quality. There’s a reason manufacturers can still make a profit when they sell their goods on buy-one-get-one-free sales (also known as "BOGO") or otherwise deeply discount their usual prices, and that reason is most likely that the raw materials used for the product were dirt cheap to begin with and the "normal price" was actually a huge markup.

But before I launch into my rant, let’s go to the pictures. 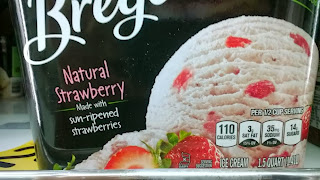 Strawberry ice cream. Simple enough. I expect to see very little besides cream, milk, sugar, and strawberries. Let’s pop the hood on this one and see what’s in there.

Huh…not bad! I was pleasantly surprised that there isn’t anything too wacky here. (And I was especially impressed that actual strawberries are the second ingredient! Will wonders never cease?) The tara gum is a little disconcerting, but it’s not the end of the world, especially when all the other ingredients are things I understand and know from whence they come.

But how about this one? Look closely…contrary to what you’d think by just picking this carton up and setting it into your cart, this is not ice cream. Say what? 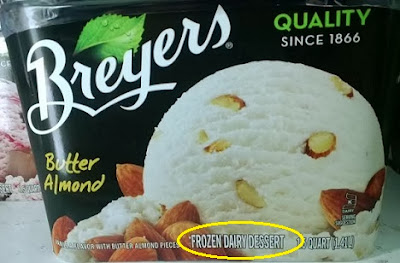 Ice cream? Nope. See, it’s as clear as day, right here on the front of the package: frozen dairy dessert. And you know we’ve gotta lift up the rug on this baby and see what’s hiding underneath.

Wow. Do you see what I see? No wonder they can’t call this “ice cream.” Except for the butter used to create the “butter almonds,” cream doesn't appear in this list until ingredient number five! That's right: there are four things more prevalent in this "frozen dairy dessert." Corn syrup? Number three. Cream? Not until five. (I'm counting the multiple ingredients in the "butter almonds" as one, and thank goodness, because if I don't, we might be fooled into thinking this has more canola oil than cream in it, and we'd have much bigger things to talk about.) The only things there are less of in here than cream are all the additives: the whey, the mono and diglycerides, and the gums & stabilizers. Way to go, Breyers, way to go. And the reason they can't call this "ice cream" is because, by law, ice cream must contain a certain percentage of milkfat, nonfat milk solids, and have a certain weight. Frozen dairy dessert has no such constraints, so they can put pretty much whatever they want in it. Yes, our tax dollars finance people who make laws about this stuff for a living. (Ice cream and frozen dairy desserts are sold by volume, not weight, so while two cartons might both be 1.5 gallons by volume, the real-deal ice cream will probably weigh more because it's more dense and rich.)

Now, the interesting thing is, this has been going on for years. I haven’t always been the label voyeur I am now, so I didn’t even notice it until recently. (Confession: I eat ice cream. Not often, but as I admitted to for bread, I go on an ice cream bender every few months and then abstain for a while before diving in again.) What made me notice is that I was enjoying—or trying to enjoy—some ice cream, but it occurred to me that the ice cream wasn’t…well, creamy. The flavor wasn’t particularly strong either, but I was more disappointed by the lackluster texture. When I put the spoon down long enough to examine the carton, I saw that what I had purchased was not ice cream, but this newfangled “frozen dairy dessert.” (The million-dollar word here is “ersatz.” It was ersatz ice cream. There. Now you can do well on the S.A.T. [Do kids still have to take that?])

I also noticed the texture change when I was eating the Breyers strawberry a while back, so I guess I've eaten enough ice cream in my life that my palate is attuned enough to notice that something was amiss. And indeed, even though I praised that very same strawberry ice cream above for having strawberries as the number two ingredient, you'll notice that it's milk and not cream that's number one. No wonder it wasn't especially creamy. (I don't know if I should be proud or embarrassed that I know ice cream so well...)

If you’ve inadvertently bought any “frozen dairy dessert” thinking it was the real deal, you probably haven’t noticed, either. It’s not always easy to discern subtle differences in flavor and texture, and that is exactly what food manufacturers are counting on—that your bourgeois palate won’t know the difference and you’ll continue to shell out your hard-earned food dollars for the fake stuff and not even know it. So the reason you might not have noticed that they’ve taken your former ice cream and factory-ized it is because they put in all sorts of fun things to give it a thick and creamy texture without the thing (cream) that would make it thick and creamy naturally. Instead of rich, fatty, delicious (and nutritious if it comes from grass-fed animals) cream, they’ve added a laundry list of other “stuff”: mono and diglycerides, guar gum, carob bean gum, carrageenan, and tara gum. Yummmmm…

Of course, as always, there are brands available that include only what you’d expect, and where cream is the very first ingredient! (And I promise, you will notice the richer texture.) Some of these can be found at your everyday supermarket; others are easily bought on-site at local dairy farms or groups that represent them. Yes, you will likely pay more for them, but again, you get what you pay for. (And you can stock up when they go on sale, because it’s ice cream and will last in the freezer for a good long time. Unless you’re like me and ice cream doesn’t last a good long time in your freezer, and not because of its quality, but because of your willpower. Or lack thereof…)

For an interesting take on this from the mainstream news media, check out this piece from the New York Times: Ice Cream’s Identity Crisis. But an interesting thing to note is that ice cream isn't the only category where this has happened. Check out the refrigerated dairy section. There will be plenty of milk, but you'll also see lots of "dairy beverages." Juice? Yep, they still sell that, but they also sell "fruit drinks." Cheese? Yes, but also "pasteurized process cheese food." Butter and "buttery spread." If it has any name other than the original, real name of the actual food, it's not the real, actual food. Posers and wannabes are bad enough when it comes to fashion and music. But when it comes to food, I prefer to keep it old school.

Note: I’m not telling you not to buy these imitation ice creams. If you like them, have at it. I’m not your food police. (Unless you want me to be.) My goal throughout this label series is simply to raise awareness. Spend your money the way you like. But at least know what you’re spending it on, ‘kay? Also: you may have an unrecognized sensitivity to some of the additives. According to Chris Kresser, who does deep-dives into the research on these things, some of the additives are fairly benign, others not so much. If you have some niggling health issues that you haven't been able to tie conclusively to something, it might be worth avoiding some of these things for a while to see if that makes a difference.

That's it for today. Have you noticed anything wacky along these lines at your supermarket? Fake and/or adulterated foods masquerading as the real thing? Let me know in the comments. Consider it a service to your fellow consumers. We've gotta help each other out!


P.S. If you come across a product and/or label you'd like me to take a look at, feel free to email me (tuitnutrition [at] gmail [dot] com), or post a link in the comments. I'm open to suggestions!

Remember: Amy Berger, M.S., NTP, is not a physician and Tuit Nutrition, LLC, is not a medical practice. The information contained on this site is not intended to diagnose, treat, cure, or prevent any medical condition.
Posted by Tuit Nutrition at 8:56 AM